R. Po-Chia Hsia (ed.): A Companion to the Reformation World 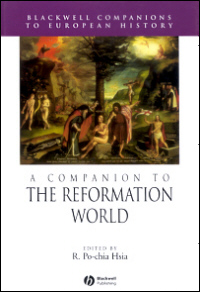 As beauty is in the eye of the beholder, the story of the Reformation is very much in the mind of the historian recounting it. The Reformation is a complex topic, which makes the writing of an exhaustive survey a difficult task. However, the progress of research during the past few decades has determined scholars to embark upon it, either individually [1] or collectively. [2] The traditional understanding of the Reformation, placing it within the chronological framework provided by the publication of Luther's thesis in 1517 and the Peace of Cateau-Cambrésis, impacts the content and structure of these surveys. [3] Some follow in the footsteps of a Protestant tradition in historical writing and restrict the meaning of the term to the Protestant Reformation in either its evangelical or confessional phase. [4] Others take into account the wealth of literature on the subject and include a discussion of Catholic reform. [5]

In this sense, this volume starts from a different definition of the Reformation world, which "existed simultaneously in different temporal and spatial dimensions" (XII). In assessing the Reformation as a distinct process, this collection takes into account both expectations for the future, which created a divide between Protestant and Radical Reformations, and the meaning of the past that widened the schism between the Catholic Church and the new churches. Impacted by the editor's previous work [6], the present collection aims to integrate the story of Protestant and Catholic Europe in the early modern period, exploring those issues which are common across the confessional divide. Geographically, the volume is remarkable in its breadth through the inclusion of east-central Europe (absent from syntheses on the Reformation before the 1990s), Latin America and Asia. Chronologically, it moves freely between the fourteenth and the eighteenth centuries.

The collection, although bringing together a number of scholars from very different historical traditions (USA, Germany, France, Italy, Great Britain, Switzerland, Portugal, The Netherlands, Hungary) has a coherent structure, which reflects the new definition of the Reformation. Each chapter is meant to be an introductory survey of a particular issue, although some have a geographical and others a thematic focus, followed by a bibliography which includes both general literature available in English and the more specific literature of the topic. The chapters differ in their understanding of what constitutes an introduction to a subject. While some resort to a predominantly narrative exposition of events, others focus on analysis and provide a more thought-provoking view of events. Most essays are rooted in the authors' research interests, thus combining general knowledge and original interpretations. For instance, based on personal expertise and taking into account the so-called revisionist literature, Haigh's chapter on the Reformation in England challenges existing historiographical assumptions. [7] Consequently, some contributions reflect major debates and controversies in recent scholarship (Haigh, Gregory).

Starting from an assessment of dominant phenomena in late medieval religion, which have generally been held to account for the emergence and success of the Reformation, the collection challenges the assumption that a pre-existent body of dissent may have encouraged the Reformation to take root (Cameron) and the causal link established between a period of crisis and the birth of new ideas (Taylor). Beginning with a chapter about Martin Luther (Kolb), part II is dedicated to the Reformation in the Holy Roman Empire. Although its other three chapters (Scott, Goertz, von Greyerz) deal with some important issues, such as the peasants' war, the radical Reformation and the progress of the new ideas in Switzerland, one is left with the feeling that thematic coverage remains incomplete. Starting from a good introduction, highlighting Geneva's role in creating a new Reformation (Kingdon), the subsequent six essays in part III, focused on the European Reformation (Spaans, Haigh, Diefendorf, Firpo, Palmitessa, Tóth), provide a rather thorough geographical coverage while outlining the general conditions for the Reformation's progress. Part IV deals jointly with Catholic Europe and confessional struggles, which suggests from the start a late chronology for the process of Catholic reform. Two essays are focused on the redefinition of religious orders (O'Malley and Leonard), which have traditionally been credited with the success of post-Tridentine strategies, a third one deals with the role of the Inquisition in promoting Catholic Reform (Monter), while a fourth illustrates its implementation in Spain and Portugal, viewed as confessional Tridentine Catholic states (Paiva). Johannes Burkhardt's essay on the Thirty Years' War provides an analytical perspective on a subject of great narrative potential, while Dan Beaver's contribution, although not wishing to identify the causes of the English civil war, seeks to narrowly explore the impact of war on parish communities and to explain some aspects of violence committed in the course of war. Part V, dedicated to Christian Europe and the world, explores missions, church formation and the meeting of religions in Latin America, India, China and Japan (Terraciano, Županov, Hsia, Cooper), all major concerns of recent scholarship. Although the focus is, at first glance, geographical, these chapters deal with complex social and cultural issues, adapting anthropological, cultural and art historical methods to historical research. Part VI is concerned with structures of the Reformation world and brings together chapters about the provision of pastoral care for the laity by a trained and educated clergy (Gordon), the appearance and legal organisation of peaceful confessional co-existence between Catholics and Protestants (Christin), the problems which magic and witchcraft presented to the Christian Churches and the increasing demonization of witchcraft in this period (Sharpe), martyrdom in the Reformation era, analysed as a cross-confessional whole (Gregory), attitudes towards Jews in a divided Christendom (Bodian) and the everyday workings of peaceful religious co-existence (Kaplan).

The volume takes into account the progress in scholarship, reflecting the most recent trends and the latest themes, which have been brought to the fore by historiographical debate; concern for gendered history, interest in popular religion, magic and witchcraft, concern for marginals within society, for tolerance and the accommodation of cultural (and implicitly religious) difference, religious communication and the forging of specific confessional identities. A methodology informed by anthropology is visible in the discussion of religious violence and the lives of martyrs in all Christian confessions, religious peacemaking and accommodation of religious difference, piety and the efforts to contain popular uses of magic and perhaps witchcraft, the devotional patterns of the laity and the lives of the new parishes of the contending churches. Several essays are informed by the comparative, cross-confessional approach, which the editor has suggested in his book on social disciplining. [8] This collection brings a fresh approach to the Reformation, a field where research had already expanded from theology to social history, focusing on such themes as confessional communities and the formation of new churches, by integrating an anthropological outlook visible in the interest in patterns of worship and confessional identity. A gendered view is provided by the insightful essay on female religious orders in both Protestant and Catholic territories, which tries to draw together some common themes pertaining to the religious experience of women (Leonard). This subject is also integrated into Goertz's essay on the Radical Reformation and Sharpe's study on magic and witchcraft. The book is informed by new definitions of Catholic Renewal, understanding the ready reception of the decrees of the council of Trent not necessarily as a reform process but rather as an affirmation of Catholic allegiance. Chapters generally provide excellent overviews of existing literature (Palmitessa, Leonard, Kolb, Goertz), while some provide precious insight into the state of research, available sources, possible future research projects, as well as a critical assessment of national historiography (Monter, Sharpe, Gregory).

While accepting the fact that different collections provide different versions of the Reformation mirroring the progress and expansion in specific sections of the scholarly field, this volume offers an interesting and thought-provoking overview of changes triggered by this process in the wider world and is equally useful as a teaching aid and as a general reference work on the Reformation.