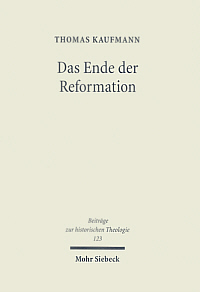 This title has nothing to do with Francis Fukuyama. [1] Nor does it deal extensively with the issue of just when the Reformation era ended. [2] The author treats the War of the League of Schmalkald and the struggle over the Interim that followed it as watershed events, regardless of the facts that, for example, at mid-century Braunschweig's ruling house had yet to adopt a Protestant creed and that the foundational ecclesiastical ordinance of Württemberg (1559) had not even been drafted. Still, for the Saxons and Hessians who had turned Lutheran in the 1520s, the divisions within their own religious party did constitute a milestone. And to his most ardent followers, Luther's own death marked the end of an age and pointed toward the apocalypse (430, 486).

Kaufmann's purpose is to delineate the formation of Magdeburg's stalwart Lutheran, Interim-rejecting party under the leadership of men like Nicholas von Amsdorf and Matthias Flacius Illyricus. These immigrant theologians ("preachers and pastors", as they referred to themselves) were hardly alone in seeing themselves as exclusively right and righteous in the ideological contests that followed the imperial victory on the battlefield. So great was theirs and their cohort's self-confidence that they claimed for the polemics emerging from their pens and presses the status of equating to God's will, of coming straight from the "chancery of Christ". These men were, they thought, the mouthpieces and secretaries of the Lord. The label 'Herrgotts Kanzlei' referred to God the Son rather than God the Father.

The author focuses on Magdeburg's role as the battle-ready defender of perceived orthodoxy in the years immediately after Luther's death and the imprisonment of Johann Friedrich of Saxony and Philipp of Hesse. In doing so, he seeks to understand the dynamics of theological differentiation and party formation that characterize the second half of the century and beyond. He has looked not alone at the pertinent output of the city's presses - the outpouring of the years from 1546 through 1552 made up over 20 percent of all Magdeburg's printing of the century (47) and made it one of the Empire's publication capitals - but meticulously pieced together the "totality" of circumstances informing its positions. The Chancery of the Lord "is the product of the reciprocal strengthening of the formative political [city councilors] and theological [clergy] bearers of action and responsibility in this Hanseatic metropolis" (65). [3]

Earlier in the century, the bishop's chapter had been resolutely Catholic and had striven for political advantage. But from an early date, the shrewd Lutheran-minded city fathers, starting in Alt-Magdeburg, calculated their advance. As elsewhere, they exploited the religious reform, aided by pressure exerted from Ernestine Saxony with Luther under its wing. The ties between Wittenberg and its northern neighbor were close. The men of the episcopal Stift ultimately compromised. Magdeburg's economic, political, and religious past comes into play here as background to orthodox partisanship.

In a large central section (209-428), Kaufmann analyzes representative printed texts by various men (Erasmus Alberus, Nikolaus Gallus, Flacius Illyricus, Nikolaus Medler, and von Amsdorf), and even hymn lyrics ('Ein schön new Trost lied auff das Interim') and illustrated pamphlets. He explicates each within the setting that produced it. Nikolaus Gallus had been forced to leave Wittenberg and was newly migrated to Magdeburg. He saw his 'Disputatio de Adiaphoris' (231-40) appear (circa early 1550) in the vernacular as well: he desired to convince both ordinary and learned audiences of his arguments against the "middle way" of compromise on the Interim put forward by Gallus's teacher Philipp Melanchthon. Despite disagreeing with his mentor, Gallus professed to love him. The new pastor at St. Ulrich's drafted his treatise in the form of 78 theses resembling a catechism in order to provide a basic orientation to the subject of adiaphora and Scripture. Von Amsdorf's treatise, 'Das nie nöter gewest ist wider den Römer Antichrist zu schreiben ...' (fall 1550), was yet harsher in tone (272-86). It unrestrainedly condemned the compromisers as men who would turn themselves and those in their charge over to the Pope. He attacked the assertion, emerging from Leipzig, that Luther himself had been an adiaphorist (278). Indeed, as if to emphasize their right to interpret Luther, the city's presses produced, as a feature of the Chancery of the Lord, a number of reprints of the Reformer's works as well as excerpts from them that appeared to support their positions (375).

For over a year, from September 1550 to October 1551, Magdeburg was under siege. Internal desperation and the fact that the new Saxon elector Moritz was himself anti-Catholic facilitated negotiation and saved the city from the destruction that it would suffer in the Thirty Years' War. Psychologically, the uncompromising divines saw the ordeal as suffering for the Word of God. Again, Kaufmann assesses the Magdeburg writers' state of mind. They accepted the cross that God laid upon them.

This book could not be published in North America today. The Anglophone reader smiles in recognition of a paradigmatic work of German scholarship: At least half of the body is made up of those footnotes - exhaustive references to the whole relevant literature - that we are enjoined to omit. Only one brand new dissertation, by Nathan Rein does not, could not, appear in the lengthy bibliography. [4] Every title that issued from the Magdeburger presses is listed in an appendix, followed by twenty black-and-white illustrations. To smile is not to sneer. This volume is an investigative and interpretive tour de force. Many of us will consult it not simply as a source on post- or late-Reformation publishing but also for its learned and astute evaluation of mentalities in an age of crisis.

[2] But see 184-85, in which Kaufmann fits Magdeburger trends into "early confessionalization", separate from the Reformation proper.