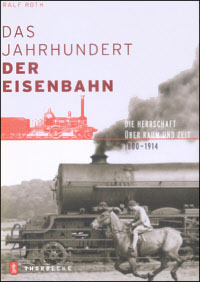 Railroads reside at the core of critical discussions in nineteenth-century European history. The economic and political importance of railroads place them squarely in discussions of industrialization, nation building, entrepreneurship, communications, modern bureaucracies, military science, government-business relations, financial innovation, and commercial banking. For this reason, too, Ralf Roth dubs the 1800s the "century of the railroad" and marshals a broad array of evidence to support the claim. Avoiding overspecialization in any one economic, political, or sociocultural theme of railroad research, Roth aims for a panoramic synthesis of railroads' importance for German and European society. Sidestepping conventional approaches that center on economy and politics, Roth's underscores railroad transport as a "mobility revolution", which had far-reaching consequences for modern social development. The condensed version of a 2003 Habilitationsschrift, Roth's work stands out for its cogent prose, succinct comparisons, and creative synthesis of disparate literatures in social, cultural, economic, and political history. The compact survey deserves a wide readership among historians and general readers.

The study is divided into three sections. The first examines the origins of railroad transportation and the struggles to establish, organize, and consolidate networks in the fragmented German nation. The second section delves into the pivotal mid-century decades of railroad development for German political economy: the constitutional implications of railroads for undercapitalized neoabsolutist states; the role of railroads in 1848/49 for national political communication; the military deployment of railroads to reassert conservative authority; and, finally, the heyday of the 1850s and 1860s, an era of explosive economic growth that produced such railroad barons as Henry Bethel Strousberg but ended with the victory of state ownership over private enterprise. The third section is the longest (six chapters), for it explores the wider consequences of railroad mobility for the remainder of the long nineteenth century. It is arguably the most innovative section, for Roth embeds railroad transportation into larger social and cultural contexts, underscoring railroads' centrality to nineteenth-century social structures and cultural practices. The breakthrough of railroad mobility is connected with the larger consequences of internal and transcontinental migration, urban and suburban planning, class formation, leisure and tourism, and the impact of railroad transportation on belles lettres and the fine arts. Railroads, he argues, not only conquered physical territory; it also reorganized social space and thus set into motion new cultural formations, from bathing resorts to suburban living to Nordic national identities. The final pages address the electrification of railroads during the second industrial revolution and the waning of railroads' significance for the twentieth century, whose vision of mobility and conquest of time would be answered with the automobile and airplane.

There are many components of this book to praise. Most welcome is Roth's international framework. He selectively uses developments in England, France, Austria, and the United States to provide a broad comparative framework for Germany's mobility revolution. Further, his German evidence is regionally balanced. Alongside the emergence of Berlin as a railroad hub and the Ostbahn's importance for eastern central Europe, Roth directs the reader's gaze to Oberhausen in the Ruhr, Cologne in the Rhineland, and rail systems in Baden, Hanover, and Silesia. Not surprisingly, as the author of a fine work on Frankfurt's Bürgertum, Roth provides thick descriptions of Frankfurt's rise as a railway center, the architecture of its train station, and its unfortunate competition with the neighboring city of Offenbach. Although Germany's northern railways are the principal actors in the narrative (Bavaria and Württemberg are given short shrift), the reader nonetheless grasps the complexities of how Germany's rail system cohered. But the chief virtue of the book is its emphasis on railroads' centrality for society and culture. For Roth, the mobility revolution cannot merely be confined to chapters on the industrial take-off and industrial productivity. Rather, railroads embody modernity because they facilitated nineteenth-century globalization; middle-class leisure and tourism; expansive urban planning; architectural design that celebrated the epic vision of train transport; and the social and cultural movements that both embraced and criticized modern urban living. Although Wolfgang Schivelbusch and others have examined the cultural implications of railroads, Roth's deployment of social and cultural history is more informed and systematic. And if many of Roth's themes are familiar to readers, it is the quality of synthesis that presents new perspectives on old material. The story of the Ostbahn or the melodrama of Strousberg are, for example, oft-told tales, but one would do well to consult this volume first for a concise and precise rendering of the events' manifold significance.

Invariably, the virtue of concision also produces blind spots. The rich problem-oriented economic history of the 1970s, typified by Rainer Fremdling, Reinhard Spree, and Knut Borchardt, receives all too little attention. For a masterly synthesis of the political economy of railroads, readers should consult Dieter Ziegler's Eisenbahnen und Staat im Zeitalter der Industrialisierung (Stuttgart, 1996). Similarly, Roth provides an illuminating discussion of the Rothschilds' international banking network and its impact on railroad construction, but this section cannot satisfactorily serve as a proxy for either the role of railroads in modern commercial banking or with mid-century banking politics, which was so crucial for the political reconstitution of the Wirtschaftsbürgertum. Finally, the concluding chapter ends too peremptorily with the First World War. Although there is no disputing the author's thesis that automobility and air travel best characterize the twentieth century, the significance of rail transport after 1918 warranted more careful analysis. Railroads in the Second World War, for example, played a decisive role in military planning. One thinks, too, of Raul Hilberg's meditations on railroad networks, timetables, and bureaucracies that made possible Nazi designs of genocide. But even for the post-1945 world, this reader would have appreciated a fuller evaluation of railroads' role in population movements, urban planning, tourism, and the other key categories of the study. The study shuts the door in the 1920s, but the decline of railroads is a complex issue that merited more consideration.

Such remarks, though, are quibbles about a work that should be recommended to both experts and general readers. The former will find new material and comparative perspectives with which to reformulate old questions. The latter will be treated to a well written survey that does justice to the overarching protean subject of railroad transport.