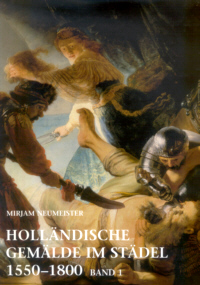 Two new volumes have been published in the series Holländische Gemälde im Städel 1550-1800: "Künstler geboren bis 1615" written by Mirjam Neumeister with the collaboration of Christiane Haeseler for the technical studies and "Künstler geboren 1615 bis 1630" by Léon Krempel. Both works contain forewords by Herbert Beck, Michael Maek Gérard and Jochen Sander as well as introductory texts by the authors of the two catalogues on the history of the collection.

Since its establishment in 1816 by the bequest of the Frankfurt banker and merchant Johann Friedrich Städel (1728-1816), the Städel, the oldest private museum in Germany, has become one of the most important art collections in the world. About 700 works by European masters are on permanent display. Dutch paintings are among the oldest in the collection. It was Dutch painting that was most popular in bourgeois circles in Frankfurt around 1800 and many collectors followed Johann Friedrich Städel's example and donated their works to the newly founded museum. The original donation included, for instance, a double portrait of a married couple by Frans Hals and a painting previously ascribed to Rubens that is now attributed to Peter Soutman. No more than a year after its foundation the museum was augmented by another Frankfurt collector, Sophia Franziska de Neufville-Gontard. This is when it acquired its first Rembrandt, David Playing the Harp before Saul, painted during the Leiden period 1630-31. Since 1899 the museum's acquisitions have been supported by the Städel Museum Association. A major Dutch collection was donated in 1934 by the banker and collector Hugo Kessler. 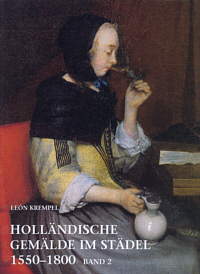 The first systematic and scholarly catalogue of the Städel collection was published in 1900 by Heinrich Weizsäcker. In 1995 an illustrated principal catalogue of the collection was published. The new catalogues raisonées are extremely important and learned publications which make a major contribution to our knowledge of 17th century Dutch painting. It is noteworthy that the catalogues have been divided up on a chronological basis rather than by centres or schools. This is a new and interesting approach that creates awareness of what was happening in different artistic centres at the same time, how clear the similarities are between artists of the same generation and how contemporary tastes gradually changed. The first generation of Dutch artists dealt with in Mirjam Neumeister's volume consists of artists born before 1615 and includes Frans Hals, Rembrandt and Jan van Goyen, all major renewers and creators of the "Dutch" style. This volume also deals with painters from the manneristic period such as Abraham Bloemaert, Karel van Mander and Roelandt Savery. The second volume covers artists born between 1615 and 1630, which means their works were produced during the "Golden Age" between 1640 and 1670. Here we find, for instance, landscape painters of Nordic scenery such as Jacob Ruisdael as well as the Italianate painters Jan Both, Jan Weenix and others. Here, too, we encounter Terborch and some of the other genre painters in the circles around Vermeer. The artists who will be the subjects of the forthcoming third volume have left what is specifically Dutch behind them and are characterised by a more international style - examples are Melchior Hondecoeter and Arie de Vois.

In each individual volume the artists are arranged alphabetically and all the entries begin with a biography followed by technical descriptions, provenances, the research background and discussion. The catalogues are enhanced by colour reproductions of all the works dealt with and conclude with informative indexes. When it comes to the internal disposition of the various elements I have a few small quibbles. The biographies take too much unnecessary space. One hardly turns to a publication of this kind for facts about the lives of artists. This information is after all available in reference works and databases. Another detail is that information about provenance is normally linked to catalogue data and could therefore have come before the long and very detailed technical sections. Finally the possibility of combining the research background and the discussion sections could have been considered to save space and avoid some repetition. At the end of the catalogues there is a diagram of Peter Klein's dendrochronological studies of paintings on panels. A great deal of material has now been gathered in Klein's database on Dutch paintings from a number of museums. In addition to the Städel in Frankfurt, mention can be made of Amsterdam's Rijksmuseum, Hamburg's Kunsthalle and the Nationalmuseum in Stockholm.

Volume I by Mirjam Neumeister

This volume contains 64 entries on 39 artists. A great deal of space is devoted, not unexpectedly, to three works by Rembrandt. These paintings are of significant quality and have long-standing provenance. The work referred to above,

Jan van Goyen is also well represented with eight works, of which a few are attributions. Where the five works by Aert van der Neers are concerned, it may be permissible to ask if they are all authentic. His late moonlit landscapes emerged around 1650. It was of these works that a large number of copies and imitations were produced shortly after the artist's death. Even though it is declared here that number 508 from 1660 is certainly van der Neer's work, I cannot avoid recalling Wolfgang Schulz's earlier doubts (2002) about its authenticity.

Any study of a collection leads inevitably to new disclosures of technical, archival and stylistic nature. The technical sections contain a great many new findings about the working methods of the painters. In particular I would like to draw attention to Abraham Bloemaert's Troy in Flames where several microscopic images of details from the painting make it easier to read the picture. It is also good to have microscopic images of several signatures, for instance the elegant signature in pure gold on the landscape by Hans Bols. Often, as with this work, infra-red reflectograms can provide additional dimensions to a painting. It is also interesting that the author is able to demonstrate formal similarities between the magnificent pair of portraits by Frans Hals from 1638 and two oval portraits of a married couple from the same year now in the Royal Collection in Stockholm.

New discoveries in the archives can provide new facts about the artists and their background. In the biography of Peter Soutman we are told that he was born in Haarlem as late as 1593-1601, not 1580 as was previously believed. The history of the attribution of his painting is also interesting as it has at times been ascribed to the Flemish school and at others to the Dutch. When it was acquired it was attributed to Rubens, in 1852 to Albert Cuyp and later to Jacob Gerritsz. Cuyp. In his catalogue raisonée on Jacob Gerritsz. Cuyp Alan Chong includes the painting as an uncertain attribution. In connection with an exhibition in Dordrecht in 2002 it was concluded that the attribution to Cuyp is untenable and Neumeister then offers an account of the ensuing discussion in which the name of the Haarlem painter Peter Soutman was mentioned for the first time. The painting can be compared with another work by the same artist, Emerantia van Beresteyn, from around 1635 in the Rothschild collection, Waddesdon. Otherwise, this earlier section of the collection is well documented and there have been relatively few changes in attributions.

This volume deals with 59 works by 32 artists. Seven of the 59 paintings come from the founder's original collection. These include two paintings by Ludolf Backhuysen, a picture of a harbour signed 1700 and a portrait of an unidentified man from Emden.

Previously the portrait was attributed to Johannes Lingelbach. A large number of works in this later volume of the catalogue are by artists who are often referred to as the "Italianate" painters: Jan Both, Johannes Lingelbach, Adam Pynacker, Thomas Wyck and Jan Baptiste Weenix. Haarlem is also prominent with both landscapes and genre paintings by Allart van Everdingen, Jacob van Ruisdael and Philips Wouwerman. Artists who were active in Leiden were Jan Steen and Quering van Brekelenkam. A number of important portraits by Rembrandt's pupil Ferdinand Bol are also dealt with here.

Among the new attributions in this volume of the catalogue special mention can be made of a genre painting by Gerard Terborch, which had for a long time been considered a copy but has now turned out to be an original. The painting dates from the artist's early years in Deventer, 1654-60. Another new discovery is a group portrait of the Halma family which is now considered to be the joint work of the previously unknown Utrecht painter Jacob Muller and Jacob Gerritsz. van Bemmel.

The collection also contains an intricate interior with a woman reading by Pieter Janssens Elinga previously listed under the names of other artists. Only around ten works by this rare master are known, including one in the Nasjonalgalleriet in Oslo.

A major painting by Gerrit Berckheyde from 1675-80 (acquired in 1817) depicting Amsterdam's Exchange is interesting for its motif. The Exchange, designed by Hendrick de Keyser 1608-1611 and modelled on those in Antwerp and London, was a rectangular building with a large inner courtyard situated at the corner of Rokin and Dam Square. The building was remodelled in 1668 by the Amsterdam architect Stalpaert (1615-1676), when a classical style was used for its southern façade.

All that remains is to congratulate Städels Kunstinstitut and the authors on their impressive catalogues and to wish them success with the volumes that are to follow.