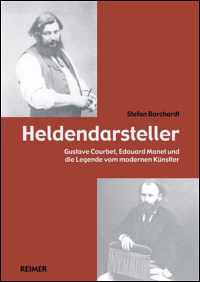 Anyone who has worked on nineteenth-century French art criticism, the history of the Salon or the Expositions universelles - indeed any kind of reception history - has encountered them: certain endlessly repeated descriptive phrases applied to artists and art works, which appear to the impatient researcher to be nothing but mere clichés. Words like "sincere", "naïve", "honest", "true to himself", "original", "natural", and so on. In the past, art historians have paid little attention to such expressions, dismissing them as the stock in trade of hack journalists assigned annually to write reviews for an increasing number of Parisian newspapers. It is undoubtedly one of the great merits of Stefan Borchardt's Heldendarsteller to have finally taken these utterances seriously, and to have sought out their deeper meaning and implications within late nineteenth-century French culture, a period which - with Courbet and Manet - saw the birth of the modern(ist) artist.

Seminal to this new conception of the artist was the notion of "authenticity". In the modern world, the painter is called upon not to express ideas but to express himself; not to follow in a tradition, but to be original; not to have a master, but to be his own master; not to paint what he knows but what he sees and feels. In the modern world, the artist and his art work are one; they are identical, indissoluble. The artist's personality makes the work, and the work is a manifestation of the artist's personality. These are views with which we are all familiar, but whose exact origins had yet to be examined in depth. Chapters I and II of Heldendarsteller are devoted to a close reading of a handful of texts - some well known (Baudelaire, Zola), others less so - through which Borchardt traces the meaning and evolution of several key terms in this discourse surrounding the modern artist. These are precisely those terms (some of which I have mentioned above) that the art historian so frequently encounters in reading the art criticism of the period and tends to ignore, ignorant of their context and precise nineteenth-century connotations. Although the writing is occasionally a little dry - a consequence of the German tendency to publish dissertations without the kind of revisions Anglo-Saxon publishers usually demand - and the author made the almost unforgivable mistake of using German translations of the original French texts (which he can clearly read and understand), the overview provided is complete and concise, essential reading for anyone interested in the subject.

This new paradigm of absolute authenticity brought with it certain problems for the modern painter: how to be true to oneself, but also to one's public? How to be natural and naïve without entirely abandoning one's learned technique? How to be without interests, devoted exclusively to a life of art, and yet be financially secure? From Courbet and Manet onwards, the artist can be said to live in an inescapable state of paradox, whereby the demands of authenticity are in constant conflict with even his most basic needs.

The greatest paradox of all was of course the fact that the birth of the "authentic" artist coincided with the emergence of a world characterized by its inauthenticity - the Paris of the Second Empire - and with increasing competition on the art market. The latter brought with it a need for visibility, and thus a need for strategies that stood in direct opposition to the discourse of authenticity. In large-scale exhibitions comprising hundreds of pictures, a "projected image" (128), a kind of self-advertising was what was called for - in direct contravention of the rejection of appearances so essential to the modern understanding of the painter. However, as Borchardt shows, these strategies were in fact designed to direct attention to exactly those qualities of both the man and his work that would prove him to be an "authentic" artist.

Chapter III deals convincingly with the very different approaches developed by Courbet and Manet to solving this particularly vexing problem. While Courbet took as his motto "crie fort et marche droit", Manet preferred a subtler tactic, making others speak of him rather than speaking of himself. From these strategies emerged the artists' "realised image" (180), which showed them to bear all the hallmarks of the modern, "authentic", painter, in fact to be the very embodiments of the notion.

As Borchardt demonstrates, Courbet consciously used every means at his disposal to draw attention to himself: the pictures he painted, the friends he made, the self-portraits and photographs that circulated through the art world - all served to build his reputation as the most "authentic" artist of them all. What Courbet achieved through skilful manipulation of his friends and the mass media, Manet accomplished on the basis of his art alone. His strategy was to efface himself completely, allowing the works themselves, their "signature style" and presentation, to prove his authenticness. The few photographs and single portrait of Manet that appeared in public served to reinforce the idea of the artist as a hard-working bon bourgeois, whose aim was not to shock his fellow citizens, but only to be true to himself and his personal vision. And there is ample evidence that these strategies were effective, as it is precisely those characteristics associated with the notion of the "true artist" that contemporary (and even later) authors saw as comprising both artists' personalities and thus the truth of their art.

Together with Chapter IV, which deals in depth with both the aforementioned paradoxes and others, as well as their consequences, these sections form the most persuasive parts of the book. Far less successful are the final two chapters. The first treats the blind acceptance by art historians of this highly constructed notion of authenticity, and the formative power of the idea even among those ostensibly seeking to undermine it. Although interesting in itself, this kind of historiographic analysis - which is part and parcel of a Ph.D., but not necessarily of an academic book - should be undertaken at the outset if it is going to be undertaken at all. Here it appears to be a kind of afterthought, which does justice neither to the authors discussed nor to Borchardt's own thought-provoking ideas on the effect of the authenticity discourse on art-historical praxis. The last chapter seems to be an attempt by a very good historian of the nineteenth century to show himself cognizant of the (hipper?) discussions surrounding contemporary art and popular culture. Anyone acquainted with the writings of Beatrice von Bismarck (for example) on the role and self-conception of the artist in late modernism and after, however, can only find these brief passages superficial.

For all this, however, Heldendarsteller is an excellent study. It clarifies a number of notions that were fundamental to art-critical discourse in the nineteenth century, and sheds an interesting new light on both Courbet and Manet in relation to various aspects of the modern art world more usually associated with "real" celebrity heroes.