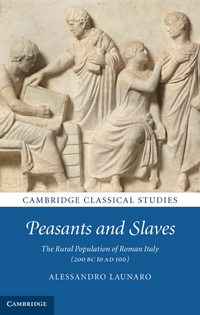 The aim of this ambitious study, a heavily reworked version of a dissertation defended at the Università di Pisa in 2008, is to put rural survey archaeology at the centre of the ongoing debate about the size of the Italian population in the time of Augustus. Its central thesis is that the trends in rural site numbers revealed by the field-walking campaigns of the past forty years lend strong support to the so-called 'high count' reconstruction of Italian population history.

The first two chapters are devoted to a critical discussion of earlier attempts to reconstruct the historical development of Roman Italy's population on the basis of various bits of information supplied by the literary sources and especially by the eighth chapter of Augustus' Res Gestae. As Launaro explains, the first emperor's claim that all of his actions followed republican precedents suggests that the roughly 4 million civium capita registered in the census of 28 BC (rising to 4.9 million in AD 14) are to be taken as referring to adult male citizens. This would give Roman Italy a population of roughly 14 million in 28 BC, rising to about 16 million in AD 14, or a couple of hundred thousand less if one chooses to assign more than 2 million citizens to the provinces. The main obstacle for this interpretation is the enormous discrepancy with the census figure for 70/69 BC, when only about 900,000 civium capita were registered. Various explanations have been offered, such as massive under-registration of adult male citizens in republican times, high population densities in Transpadana (most of whose free inhabitants did not obtain citizenship until 49 BC) or the enfranchisement of millions of provincials by various Roman generals and politicians of the period 83 BC-31 BC, but none of these theories can be proved. For this reason many scholars continue to adhere to Beloch's theory that the enormous jump in the census figures after 69 BC can only be explained by assuming that the Augustan figures, unlike the republican ones, included women and children of citizen status. However, as Launaro correctly points out, apart from the jump in the census figures itself, there is no reliable evidence to support this interpretation.

In discussing these issues, the author scores a couple of good points, especially against those who have tried to argue that the high census figures of early-imperial times make perfect demographic sense if they are understood as referring to all Roman citizens sui iuris, including widows and orphans. In a recent article (published in Classical Quarterly 59) Walter Scheidel notes that phrases referring to the exclusion of widows and orphans from the republican census figures are found only in the third and fifty-ninth books of Livy's Ab Urbe Condita, which he assigns to the census years 28 BC and 8 BC. From this he deduces that widows and orphans were included in the Augustan tallies. However, as Launaro observes (26), this ingenious theory does not explain Livy's failure to refer to widows and orphans when reporting the census figures for 459 BC (Book III.24) and 125/4 BC (Periocha LX).

In his second chapter Launaro also discusses another important building block of all previous reconstructions, the list of Roman and Italian manpower resources provided by Polybius in his account of the Gallic invasion of 225 BC (Pol. II.24). Here his main point is that all of the figures given by Polybius, including that for the Romans and Campanians, are to be interpreted as referring exclusively to iuniores, that is to say, to men belonging to the age bracket 17-45. If this reading could be proved correct, we would have to conclude that mainland Italy (including Cisalpine Gaul) had between 6 million and 8 million inhabitants on the eve of the Gallic invasion. Unfortunately for Launaro, however, the underlying assumption that the Latin expression qui arma ferre possent and the Greek phrase hoi en tais hêlikiais cannot possibly have included men aged between 46 and 60 is demonstrably incorrect (see e.g. Livy I.43-44; Ps.-Arist. Ath. Pol. LIII.4). This casts considerable doubt on the validity of one of the central claims informing the author's investigations, namely that the low count necessarily implies a drastic decline in the free Italian population which ought to be reflected by the rural survey data. In reality, while the period 225 BC-28 BC may have witnessed a severe decline in the free populations of certain areas, recent formulations of the low count assume that the free population of Italy as a whole experienced no significant downturn until the large-scale settlement of Roman citizens in provincial colonies by Caesar and the triumviri. This short-term development cannot be expected to have left clear traces in the Italian countryside.

While philology may not be Launaro's strongest suit, we reach much firmer ground in chapters 3 to 6, which focus on the use of rural survey data as a basis for demographic conclusions. While acknowledging that most attempts to translate survey data into absolute population figures are problematic, he argues that increases or decreases in rural site numbers are likely to reflect long-term population trends. As a next step he deals with the problem of comparability between the results of field campaigns using different systems of classification by developing a uniform site typology, based on a distinction between small farms, larger farms, villas and villages. Another important step forward is the consistent application of various calibration techniques, which are necessary because the Republican Black Gloss period (350 BC-30 BC) covers a much longer time span than the Early Sigillata phase (30 BC-AD 100).

Building on these foundations, chapter 5 offers a valuable 'gazetteer of surveys' which re-analyses data relating to more than 5,000 rural sites across mainland Italy. Perhaps inevitably, there remains room for some methodological quibbles. Is it really possible, for instance, to extract meaningful trends from the data revealed by the Polcevera Valley and Ager Lunensis surveys (110-111) where fewer than 10 late-republican sites were detected, or even from the Roccagloriosa survey (143) which revealed the existence of only 9 farms and 2 villages which can be assigned to the period 200 BC-50 BC? Why does the section on the Ager Foronovanus (123) label all sites covering more than 500 square metres as 'villas', whereas in the case of the Ager Venusinus (137) all sites covering 400 to 800 square metres are classified as 'farm 2' sites, that is to say, as medium-sized farms? And if the growth of cities in late-republican times implied higher levels of commercialisation in the countryside, how can we be sure that an increase in visible sites reflects population growth rather than (inter alia) better dissemination of finewares?

Notwithstanding these caveats, the reviewer has no quarrel with Launaro's conclusion that most of the surveys undertaken in the countryside of mainland Italy point to an increase in 'farm' sites between the Black Gloss and Early Sigillata periods. It also seems reasonable to interpret this general trend as suggesting rural population growth. Part of the interest of this finding lies in the fact that it undermines the old but persistent theory that from the second century BC the spread of agricultural slavery pushed the free population of the Italian countryside into irreversible decline. While this is certainly an important conclusion, Launaro ventures into much more dangerous territory when asserting that an increase in farm sites cannot be reconciled with the low-count view of Italian population history. As we have seen, his starting assumption that the low count implies a dramatic decline in the free rural population is far from bullet-proof. More importantly, however, his interpretation of the long-term rural site trends revealed by rural surveys glosses over the fact that his Early-Imperial phase, spanning the 150 years between 50 BC and AD 100, includes a period of 130 years which is widely seen as a time of vigorous population growth in Central-Western and Northern Italy. In chapter 6 (162) Launaro insists that the upward trend revealed by the rural survey data is unlikely to have started in the second half of the first century AD. That is reasonable enough. Why, though, is the author is not prepared to envisage a scenario in which Italian population growth resumed in the late 20 BC, when the civil wars had ended and the settlement of veterans in provincial colonies had been scaled down? It may be noted that this alternative scenario is supported by the results emerging from the recent Tiber Valley Project. Judging from the ceramic evidence, more than 60 per cent of all sites detected in the Tiber Valley came into existence during the first century AD (see the article by Bousquet, Felici and Zampini in F. Coarelli and H. Patterson, eds., Mercator Placidissimus, Rome 2008). It does not seem far-fetched to attribute Launaro's reluctance to think through the implications of this alternative model to an understandable unwillingness to credit Roman Italy with a population in excess of 16 million, the level logically implied by the high-count reading of the Augustan census figures.

The final verdict on this monograph can only be positive. By creating a uniform typology of rural sites and developing a set of sophisticated calibration techniques Launaro has rendered Roman archaeologists and ancient historians an enormous service, and the effort that has gone into processing and analysing data relating to several thousands of rural sites can only be called Herculean. For these reasons alone this innovative book can be warmly recommended to all those interested in the history of late-republican and early-imperial Italy - even if its central thesis remains open to dispute.