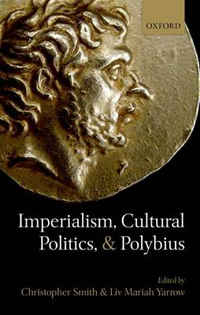 The present book, edited by Christopher Smith and Liv Mariah Yarrow, is the publication of a conference organized to the memory of Peter Derow at Oxford in 2009. As expected in the case of a book whose origin is a conference, the volume is a rather heterogeneous compilation of essays, whose value and interest to scholars are uneven. In fact, this can be noticed by the reader from the title. However, the editors have been fairly successful as organizers, because they were able to structure the book in three balanced sections. The first one focuses on the literary and lexical influences on Polybius' writing, while the second one combines historical and historiographical approaches to investigate the mechanisms of imperialism and the third one looks at the political significance of the cultural engagement between Rome and the Greek East. Formally, the book has fifteen chapters, an introduction by the editors as well as a useful "index locorum" and a "general index".

As noted above, the compiled essays cover a variety of heterogeneous topics: 1) Andrew Erskine: "Polybius among the Romans: Life in the Cyclops' Cave"; 2) Brian McGing: "Polybius and Herodotus"; 3) Tim Rood: "Polybius, Thucydides, and the First Punic War"; 4) Georgina Longley: "Thucydides, Polybius, and Human Nature"; 5) David Langslow: "The Language of Polybius since Foucault and Dubuisson"; 6) Andrew Meadows: "Deditio in Fidem: The Ptolemaic Conquest of Asia Minor"; 7) David Potter: "Old and New in Roman Foreign Affairs: The Case of 197"; 8) Amy Russell: "Aemilius Paullus Sees Greece: Travel, Vision, and Power in Polybius"; Liv Mariah Yarrow: "Decem Legati: A Flexible Institution, Rigidly Perceived"; Oliver Hekster: "Kings and Regime Change in the Roman Republic"; Nikola Čašule: " 'In Part a Roman Sea': Rome and the Adriatic in the Third Century BC"; John Ma: "Honorific Statues and Hellenistic History"; Hugh Bowden: "Rome, Pessinous, and Battakes: Religious Encounters with the East"; Bruce Gibson: "Festival and Games in Polybius" and Jonathan Williams: "From Polybius to the Parthenon: Religion, Art, and Plunder". This heterogeneity militates against any attempt to interpret the book as a whole, so what is proposed here is a reading chapter by chapter.

The editors propose in the introduction an interesting historiographical discussion about the topic of Roman imperialism in the Middle Republic, criticizing the perspective of Arthur Eckstein regarding the question of mechanisms of diplomacy and interstate arbitration. [1] The criticism is against one of the most controversial aspects of Arthur Eckstein's thesis, but in my opinion is misguided, because I am not sure that this author denies the existence of these mechanisms of negotiations between polities, but he only maintains that in decisive moments that did not work. All in all, a weak aspect of the introduction is its almost exclusive focus on the question of imperialism. Although some time ago Arnaldo Momigliano argued that our understanding of Polybius depends on our understanding of Roman imperialism and vice versa, the title of the book is Imperialism, Cultural Politics, and Polybius, and there is no discussion of the previous readings of Polybius' work or of what the authors understand by "cultural politics". [2] A discussion, as was done in the case of Roman imperialism, may have been useful in order to improve the internal coherence of the volume.

The first section, as noted above, deals with Polybius. In the first essay, Andrew Erskine proposes a very interesting insight into the nature of Polybius' stay in Rome. The author provides us with a useful discussion on the status of the Achaean historian in the city. In this sense, according to the author, our view of Polybius as a privileged individual who was able to stay at Rome and became a great historian should be change because his detention was not without a sense of menace. The following chapter is written by Brian McGing on the suggestive topic of Herodotean reception in Polybius' work. The relation between Polybius and Thucydides is the subject of a thorough reading by Tim Rood. I think the approach proposed in this chapter is stimulating and the conclusion convincing, pointing out that Polybius exploited Thucydides in order to deep his analysis of the process of expansion of the Romans. Anyway, the tendency to focus his research only on Anglophone academic literature limits the scope of his contribution. In this sense, it would be important to quote not only Domenico Musti, who had a very interesting insight on the topic, but also the quotation of François Frazier regarding Tim Rood's discussion of parádoxos would be desirable. [3] Georgina Longley makes a comparison between the views of Polybius and Thucydides on human nature and its place in the historical process, understanding human nature as the role played by the actions and reactions of human beings in explaining events. It is interesting to notice the way in which the author stressed the "human factor" in the historical causation in Polybius, showing some parallels with a modern analysis by Marie-Rose Guelfucci. [4] Although I strongly recommend the reading of this comprehensive chapter of the book, it would be advantageous in his discussion on anger (76-77) a more careful reading of recent bibliography on Greek emotions in order to make his argument deeper. [5] Finally, there is a useful discussion on the language and style of Polybius by David Langslow, in which we can recognize not only the complexity of the transformations of the Greek language during the second century BC, but also Polybius' carefulness with regard to his style.

The second section about the mechanisms of imperialism opens with an article of Andrew Meadows, in which he enlightens us on the Ptolemaic expansion in Asia Minor during the third century BC. The author focuses on epigraphic material that enables him to offer a totally new and convincing reconstruction of the Ptolemaic expansion in the area in the time of the battle of Corupedium (281 BC). All in all, Andrew Meadows may be criticized because of his unnecessary use of Latin technical terminology as Deditio in Fidem to characterize the particular interaction between Ptolemaic power and local poleis in Asia Minor, because this Roman political practice cannot be equated to the Hellenistic one, at least from Polybius' perspective (XX.9.11-12). Meanwhile, David Potter warns us about thinking in a major transformation of Roman imperial plans around the years 198/7 BC, because in fact his conclusion is that by that time Roman state lacked the institutional capacity for a coherent imperial administration or even for the formation of a coherent imperial policy. The following chapter is written by Amy Russell and, in fact, it should be included in the previous section because of his focus on Polybius' view. This author provides here a really breath-taking reading of Aemilius Paullus' trip around mainland Greece in the Histories, showing us in which way it is possible to notice the progression of a gradual change in the visual practice by the Roman consul. Liv Mariah Yarrow, meanwhile, warns us against the misconception of the supposed stability of the institution of Decem Legati during Roman Republic, while Olivier Hekster talks about flexibility of Roman foreign policy but regarding the space of manoeuvre gained by client kings when politics at Rome started to be divided.

The final section is by far the most heterogeneous. Nikola Čašule opens the section arguing against the historiographical consensus according to which Romans were uninterested in Illyrian affaires until they were forced to intervene in the First Illyrian War (229-8 BC). The author added much archaeological, epigraphic and numismatic evidence that, as Nikola Čašule thinks may show that the Adriatic Sea was an interconnected entity from the late fourth century BC and, because of that, the Roman intervention in the First Illyrian War ought to be perceived as neither surprising nor unexpected. The hypothesis is highly plausible and reasonable, but sadly the evidence presented by the author does not seem consistent with the hypothesis. The following chapter is maybe one of the best of the book. John Ma analyses the well known practice of setting up statues in the Hellenistic world, taking into account the cases of the Amphiareus in the territory of Oropus and of the agora of Priene. Hugh Bowden studies the relation between foreign Roman policy and religion in the case of the cult of the Magna Mater, proposing a new interpretation about the political circumstances of the introduction of this foreign cult in Rome. Meanwhile, Bruce Gibson focuses on the cultural importance of festival and games in the Histories of Polybius. Finally, Jonathan Williams puts at stake the traditional link established between the modern juridical concept of cultural property and the famous excerpt of Polybius' Histories on the sack of Syracuse.

To conclude, I can say that, in my opinion, Christopher Smith and Liv Mariah Yarrow have edited fifteen essays, which, though with slight differences between the qualities of them, are really an important contribution to our understanding of Polybius and his world.

[1] Arthur Eckstein: Mediterranean Anarchy, Interstate War and the Rise of Rome, Berkeley, 2006; Rome enters the Greek East. From Anarchy to Hierarchy in the Hellenistic Mediterranean, 230-170 BC, Oxford, 2008.