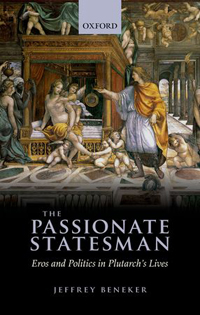 The book under review is the latest in a series of recent OUP monographs on Plutarch. Building on the work of Stadter, Pelling, and Duff in particular, it focuses on Plutarch's interpretation of the role of erōs, love, in the Parallel Lives. More specifically, it shows 'how erōs can act as a lens both for his interpretation of historical sources and for his composition of political biographies' (3).

After an introduction showcasing Plutarch's interest in his protagonists' erōs and summarizing the chapters that follow, the first two chapters define the philosophical background to Plutarch's approach to erōs in the Lives. The first chapter sets out Plutarch's views on moral virtue and on love as they appear in the Moralia, especially in On Moral Virtue and the Dialogue on Love. Beneker shows how Plutarch moves beyond both Plato and Aristotle by awarding (a moderate) erōs a positive role even in relationships where pleasure-friendship has given way to virtue-friendship. The couples used to illustrate this are Brutus and Porcia as well as Pericles and Aspasia. In the latter case, Beneker skillfully demonstrates how Plutarch manipulated the tradition concerning Pericles' relation with Aspasia in order to conserve his positive portrait of the Athenian statesmen. In the second chapter, Beneker introduces the concept of 'historical-ethical reconstruction'. This concept not only draws attention to the fact that Plutarch often reads psychological traits back into his protagonists' youths in order to explain their subsequent behavior, but also emphasizes 'how moral virtue shapes his general perception of history and his re-creation of historical events and persons' (58). A good illustration is offered in Beneker's reading of the Lives of Pelopidas and Marcellus, where Plutarch, as opposed to other authors before him, does not limit himself to moralizing comments about the protagonists' uncharacteristic deaths, but structures his narrative so as to make the reader expect the unexpected from the outset. The question that arises, is whether historical-ethical reconstruction led Plutarch to generalize. Although, as Beneker demonstrates, this is, to some extent, the case, Plutarch can still 'claim to have written a better, more probable narrative even though it is based on evidence external to the tradition' (98). This is particularly well illustrated in Plutarch's Life of Dion, where the depiction of Dionysius as a typical tyrant, often phrased in terms of erōs, makes it almost inevitable for Dion to become his enemy.

The remaining three chapters sharpen the focus on erōs, each treating its role and presentation in a pair of Lives by way of case study. Chapter three focuses on the Alexander-Caesar. Alexander surpasses his father Philip as well as his enemy Darius by giving priority to his high-minded ambition over erōs. As a result, he conquers vast territories. When a limit is put to his ambition and conquests, however, Alexander indulges in erōs. In order to establish this connection between love, moral virtue, and politics, Plutarch artfully presents Alexander's love affairs: whereas the earlier chapters of the Life show Alexander's erotic self-control not only by describing his respect for Statira, but also by presenting his affair with Barsine as more than mere sexual attraction and by positioning his marriage to Roxane before the murder of Clitus, thus explaining it as a political asset, the beginning of Alexander's end is powerfully symbolized by his kissing of Bagoas. In the case of Caesar, who was well-known for his many love affairs, it was not possible for Plutarch to argue for erotic self-control. Instead, he made it clear that Caesar's erōs for glory was always greater than his erōs for women. Thus Caesar's attraction to Cleopatra is ascribed not to her beauty but to her cleverness, and the start of the war is not connected to her, but to the machinations of Pothinus. Mark Antony, the main subject of the next chapter, is, as it were, Caesar's opposite in that he allowed erōs to interfere with politics, and thereby caused his own downfall. Beneker divides Plutarch's Life of Antony in six parts, separated by changes in Antony's attitude towards women and erōs. Whereas his marriage to Fulvia appears as a lost opportunity, the contrast between Octavia and Cleopatra powerfully symbolizes the struggle between Antony's reason and passion. Pompey, finally, who appears in the last chapter, occupies the middle ground between Caesar and Antony: neither as detached from erōs as Caesar nor as much dominated by it as Antony, he at first resists erotic desire, but later, at a crucial moment, succumbs to it. Neglecting Pompey's good political reasons for governing Spain through legates rather than in person, Plutarch thus presents his excessive love for Julia as a sign that reveals his failing character and thus brings about his political downfall. Erotic episodes, so the last chapter concludes, are thus never there for their own sake, but as a cue for moral and political success.

Beneker's own approach in The Passionate Statesman is along the same lines: far from giving an overview of the many love affairs of Alexander and Caesar, Demetrius and Antony, or Agesilaus and Pompey, Beneker makes the far more interesting point that Plutarch reads and presents his protagonists' attitude towards erōs as a cue for their psychological health and, above all, political behaviour. The book is eminently readable and mercifully concise - even though the latter comes at a cost: the introduction is rather brief (6 pp.), there is no conclusion except for the last section of the last chapter (4 pp.), and engagement with broader theoretical or methodological discussions, which Beneker is definitely aware of, is quite limited (Foucault's analysis of Plutarch's ideas on love is merely mentioned in passing, for example, and the concept of 'historical-ethical reconstruction' is not discussed against the background of Hayden White or Dorrit Cohn.) Nevertheless, Beneker presents a convincing analysis of Plutarch's treatment of erōs in the Lives, with careful judgements on his treatment of source material, enlightening philological comments on individual passages, and, above all, an innovative, illuminating interpretative framework. As such, he has proven himself to be a worthy disciple of his supervisor Philip Stadter.