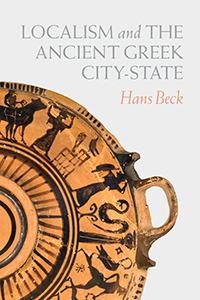 The volume under discussion here stems from a very simple principle, the examination of the Ancient Greek Culture under the prism of a buzzword in fashion today, in this case the concept of localism and all the related concepts, bottom-up globalization and 'glocalization'. It is undoubtedly a modern concept that is very well adapted to Ancient Greece, divided as it was into dozens of autonomous cities. The aim of Hans Beck is not to write a micro-history of some Greek cities or regions with strong particularism, but rather to offer a study of the phenomenon of local particularism in the Ancient Greek world (xiii).

The book is divided into six chapters. The first one (1-42) is an introduction, where the concept of localism is developed around two main points: recent trends in modern historiography on the subject, not only in Ancient Greek scholarship but more generally in Social Sciences; and a survey of the concept of local, or epichoric, in Greek sources. The scope of the book is also specified both in terms of chronology and geography (40-41): it deals mostly with the Classical period, and the case-studies are drawn from what Hans Beck calls "core Greece", that is to say, Central Greece, notably Boeotia, Megaris, Northern Peloponnese and Argolis. In this chapter an example, Phlious, is also developed as a test-case, giving a welcome insight to the method of the author and to the breadth of his subject (11-18).

In the second chapter, Hans Beck explores everything related to the land itself, and how it becomes a territory, a space appropriated by a given community, giving birth to specific representations such as autochthony.

The third chapter treats the local as a sensorial experience; this includes, for instance, a description of local gastronomy, but also material culture, sport, and music - in short, everything that forms the essence of local pride today, transposed in the Greek world. The pages devoted to food are excellent and even surpass the reach of the book by giving a vivid introduction to the topic.

The fourth chapter deals with various topics related to religion, from a local perspective: local cults, religious landscape and topography, but also local calendars are evoked. The chapter ends with a reflection about ephebeia.

In the fifth chapter local history is treated. Starting with a reflection on local historiography, Hans Beck then shifts to local networks, and notably proxenia, as a mean to spread news, and to the reception of historical events from a local perspective. The Persian wars are taken as an example, and in two sections the author shows how such a panhellenic event was perceived in Aegina, Argos, Megara, or Thebes, giving birth to very different local narratives of the same episode. This is undoubtedly one of the most stimulating passages of the book.

The sixth chapter, lastly, is a general conclusion. The book is completed with a rich bibliography and a general index. The book includes eighteen illustrations. While it is a very welcome addition, several of them (1.3, 1.4, 1.5, 1.6) could have been easily replaced by others that more directly illustrate the subject.

As nothing is perfect, this book presents, of course, a few limitations or shortcomings that should be stressed here. On the whole the subject is perfectly covered and supported by a rich body of evidence, even though some topics (local musical traditions, dialects, local scripts and epigraphical habits, for instance) would have benefited from being treated more thoroughly in dedicated sections. On close inspection, a few details or references turn to be imprecise or even inaccurate (see, for instance, the assumption that during the festival of the Daidala at Plataea, "the daidale, the young male leader of the procession, was dressed as a bride" (147), which is clearly not what Pausanias or Plutarchus wrote on the topic, Daidale (in the aetiological myth) and the daidala of the festival being only wooden statues).

The main flaw, however, is certainly one of geographical and chronological scope. Hans Beck deliberately chose to impose restrictions on his subject: as mentioned, the book is mostly based on examples from Central Greece, while other regions are evoked only with occasional examples, or not mentioned at all. Thus, under a title involving 'the Ancient Greek City-State' at large, Hans Beck wrote a book about Central Greece with a few references to other regions. To treat such a subject, however, it may have been beneficial to include at least some selected test-cases from other areas of the Greek world. Of course, it is not possible in a single book to write about everything; but in a book about localism, one can regret that the diversity of the Greek world is not entirely explored, because large areas which raise specific questions (relations with non-Greeks, insularity, relations between colonies and metropoleis) are not fully taken into consideration.

The chronological scope also raises some problems. Hans Beck tried to restrain himself to the Classical period, maybe because another book, more directly focused on the Hellenistic period, is announced (213); but I do not think that such a subject really fits the traditional breakdown between Classical and Hellenistic periods, and on the question of localism there is much more continuity between the two periods than the author acknowledges. On many occasions, Hans Beck has in fact to rely on Hellenistic sources, that are used only to assess what may have existed already in the Classical period (see, for instance, the development about patrols in the territory in Boeotia (66)). This reluctance to engage with the Hellenistic period is very clear on the pages which deal with ephebeia (150-160): it is presented as a typical institution of Greek poleis of the Classical period. However, it must be stressed here that, notwithstanding the existence of educational or military programs in the Late Archaic and Classical periods, the terms of ephebe/ephebeia appear in this context only in the course of the fourth century for Athens, and even later for other regions. It is only for the Hellenistic period that ephebeia becomes a standard institution all over the Greek world, attested by a great number of documents. In short, even though the existence of organized training programs during the Classical period cannot be debated, from a local perspective, they were certainly not termed as ephebeia. All this passage suffers from the fact that the author chose not to treat ephebeia for what it is - a mostly Hellenistic phenomenon - and made all sorts of circumlocutions to discuss it only from a Classical point of view, where it would have been simpler and no less interesting to treat it with the Hellenistic sources, as a Hellenistic institution testifying to the persistence, and even the spread, of locally anchored institutions after 338.

Overall, however, there is much to praise in this book. The investigation, written in a vivid and pleasant style, is clear and erudite, with many welcome references to fragmentary historians. It will be a stimulating read not only for specialists, but also for students or for scholars interested in the topic without being familiar with Ancient Greece, owing to the fact that the author takes great care to introduce each example with a few general lines, even when it concerns topics or material widely known by specialists (for instance the Tanagra figurines (99-102) or the institution of proxenia (177-180)). In short, such a book greatly contributes to shed light on the diversity of the Greek world, which was definitely not as monolithic as it is too often deemed.