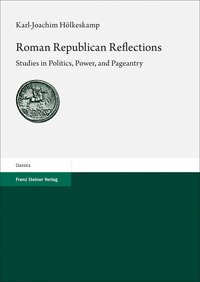 Karl-Joachim Hölkeskamp needs no introduction: his name ranks among the most influential scholars of the Roman Republic of the last decades. He is especially known for thought-provoking and fruitful studies on the Republican 'political culture', which have stimulated much debate and further research. One of Hölkeskamp's distinctive features as a scholar is the consistent updating of his papers and books: revisions are apparent in the new edition of Die Entstehung der Nobilität (20112), in the many translations of the authoritative Rekonstruktionen einer Republik (2004), and in the previous collections of his essays, Senatus Populusque Romanus (2004) and Libera Res Publica (2017). The new collection of papers that is reviewed here features the re-edition of seven papers in English on very similar (or even overlapping) issues - except for the first chapter, which is a newly written introduction to the book and serves as a very brief summary both of the main debates on the essence and character of Roman politics during the twentieth century and of recent research trends.

The common thread of these papers is not confined to their language of publication. "A Study in Interconnectedness" might well have figured as an alternative subtitle. Each chapter deals with a specific aspect or perspective: (Ch. III) the leading role of the consuls in the hierarchically shaped and symbolically layered performances of power and rituals; (IV) the manifold and interrelated reverberations of the focal points of the elite's rhetorical strategies; (V) the self-fashioning of the elite through the erection of temples and monuments, the dedication and display of spoils, and the increasing monumental competition; (VI) the stratified and articulated expressions of the Roman cultural memory, which shaped (and was, in turn, shaped by) the historical perception and monumental landscape; (VII) the dissection of the evocative power of the monuments erected on the "memory-scape" of Rome, accordingly exploited both by scions of the noble families (in this case-study, the Marcii) and by members of the broader Roman political elite; (VIII) the ramified and entangled web of references that substantiated the sophisticated Multimedialität of the representative strategies of the Scipios (as is the case with other noble families that have drawn Hölkeskamp's attention, especially in the last years).

All these chapters are closely connected by the effort to investigate the expressions and products of the Roman 'cultural memory' and 'political culture', and to bring out the complex "web of significance" of Roman landscape and the "interconnectedness" of the multiplex rhetorical, monumental, ritual media (in the broader sense of the word), which were employed by members of senatorial families in the framework of their self-fashioning strategies and their hierarchical construction of consensus. Throughout the volume, the reader finds topics, sources, and monuments that students and scholars should already be very familiar with, such as the pompae and laudationes funebres, the Scipios' elogia, the spatial significance of the ritual routes, the temples, statues and monuments scattered across Rome's lieux de mémoire. These leitmotifs (and the limited set of sources at our disposal) are continuously (re)analysed and enhanced by Hölkeskamp through new interrelated perspectives and fruitful triangulations. The "interconnectedness" that ties together not only sources and monuments, but also Hölkeskamp's papers is semantically and textually expressed through the extensive use of bracketed words, prefixes or suffixes, and wordplays (e.g. "memory-scape" or "re-present-ation") that Hölkeskamp's works are dotted with. This style, which sometimes can prove elusive, is the clear symptom of an effort to fully exploit the latent semantic potential of modern languages and to reach the core of Roman thought and memory structures, by disentangling their multifarious ramifications and connecting them again into a new whole.

There is an exception to the common thread so far charted. The second chapter is the slightly modified and updated discussion of the English translation of Friedrich Münzer's Römische Adelsparteien und Adelsfamilien (1999). The insertion of this paper at the beginning of the book, right after the introductory chapter, can be explained by the pivotal role that the rejection of the so-called 'prosopographical method' - together with the adamant disproof of Fergus Millar's 'democratic thesis' - plays in Hölkeskamp's approach to the analysis of the Roman elite, its 'political culture' and 'grammar'. The assiduity with which he dwells, in his works, on the (already widely acknowledged) scholarly flaws of the prosopographical tradition of studies gives some credit to the image of Münzer as "one of the ghosts that Hölkeskamp most wishes to exorcize". [1] The concern that the past influence of Münzer and his epigones may spur endeavours to resurrect prosopography as a tool for a comprehensive analysis of Roman politics is apparent in his work. The theoretical and empirical soundness of many criticisms to the prosopographical tradition of study notwithstanding, Münzer's book may be worth a new careful reading - at least to fully appreciate his historical vision. [2] Furthermore, one of the challenges of future work on Republican politics might be precisely to achieve an effective combination of research on 'political culture' with prosopographical studies, which cannot confine themselves to the biographies of senators and the list of their honores, but should also return to the interpretation of the political competition within the elite. Political groupings and alliances did exist and were not irrelevant, even though some evidence and assumptions once exploited are now proved to be fallacious.

Hölkeskamp's latest collection of essays is a thought-provoking read, albeit not uncontroversial, like his many other works. All in all, one might have the impression to be facing a new all-encompassing "frozen waste" theory (to use John North's well-known label): a self-perpetuating dialectic between Konsens and Konkurrenz, between aristocratic self-fashioning and ritual interactions with an amorphous and passive people - detached from the harsh reality of politics, social developments, and legitimacy crises. [3] The fact remains, however, that Hölkeskamp's book is a fundamental one: it represents another exemplary model of fruitful dialogue between Ancient History and wider debates on memory processes, on the one hand, and on political culture, on the other, notably those prompted by the 'linguistic' and 'cultural turns'. Hölkeskamp's reflections - which are supported by an abundant bibliographic apparatus and a thorough set of indexes - will prove most helpful and stimulating to scholars and students of the Roman Republic, and to historians working in other fields as well.