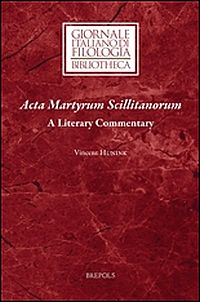 In this short volume Vincent Hunink provides the first full-length commentary in English on the early Christian martyr narrative commonly known as "The Acts of the Scillitan Martyrs", a text as intriguing as it is brief (a mere 375 words, including its title). [1] This text describes the interactions between a group of North African Christians and a Roman governor, Saturninus which results in the execution of the former. It is usually dated to the late second or early third century, making it not just one of the earliest of the martyr narrative "genre", but the earliest surviving early Christian text in Latin. It is thus of great importance, and merits the attention it is here afforded.

One advantage to Hunink's volume is that from the start he recognises the twin historical and literary importance of the text, and pays due attention to both throughout. An "Introduction" thus familiarises readers with this text, the historical events it purports to describe, and the manifold problems prompted by both. We do not know when or by whom the text was written; though Saturninus is a known historical figure, we do not even know where the trial took place, let alone where Scilli was, or anything about the arraigned; and almost every line of the text raises as many questions as it answers. Despite the volume of attention these matters have predictably elicited, Hunink is still able to tease out original points. On just the second substantive page, for example, he observes that the date of the arraignment (17th July 180) need not in fact correspond to the date of execution; another noteworthy example is his interesting discussion of Augustine's three sermons on these martyrs (75-76). More broadly, throughout he draws attention to and discusses the prominence of Speratus as the most vocal Christian, and a kind of (official? unofficial?) spokesman for the rest of the group (itself of unclear and apparently varying size).

After the "Introduction", Hunink provides a text of both the Latin original and a later Greek - probably liturgical - recension (both based upon those of Fabio Ruggiero) [2] an accurate and clear translation of both, and a lemmatised commentary. The latter, which makes up most of the volume, contains a pleasing mix of palaeographical, linguistic, stylistic, intertextual, historical, and reception commentary, as well as drawing the reader's attention succinctly to the controversies and views of the (many) other scholars who have commented on the text in a great variety of languages (often remarking on the piety that has consistently infused their writings). Hunink has a particular interest in 'how it functions on both the dramatic and the narrative levels ... the AMS is analyzed above all as an exciting live altercation' (21). Given this interest, and the attempt in the translation 'to facilitate reading the text as drama' (24), it would have been interesting to see more engagement with recent work on ancient drama, Roman performance, and Christian liturgy. But that quibble aside, this is for the most part a fundamentally worthy, usable, and enjoyable volume.

Having said that, I do have two interlinked intellectual concerns, though these stem in part from a fundamentally different approach to early Christian history and literature, and should be taken with that in mind. First, Hunink is alive throughout to what has been the most discussed - and perhaps has thus become the most stagnant - controversy surrounding the early Christian martyr narratives, namely their authenticity. While acknowledging the possibility and even likelihood of editing in a number of places, he seems ultimately committed to the view that what we have largely represents a dialogue that actually occurred: e.g. 'It would seem more likely, then, that in most of the AMS not many authorial changes were made with respect to its original form' (15). This conclusion is based on a rejection of earlier theories of elaborate Christian literary modelling. But there is considerable middle ground between elaborate literature and untampered transcript, and though the scholarly conversation continues, [3] I think it is fair to say that the burden of proof now rests with those that favour such authenticity (and indeed one of the key works here, Gary Bisbee's Pre-Decian Acts of Martyrs and Commentarii, is missing from the bibliography). [4] One justification Hunink gives for his position, for example, is that 'if a truly Christian color had really been added, one might expect a far more negative typecasting of the Roman magistrate, and perhaps some edifying moral and theological digressions by the martyrs' (20; see too 50). But in fact the depiction of Roman authorities in neutral shades is a well-recognised feature of other early Christian accounts, and arguably reveals a more critical attitude to Rome (since when individual magistrates are villainised, it enables blame to be ascribed to them as individuals, rather than to the wider system of governance they represent). [5] And moreover, as Hunink acknowledges, the text does actually start and end with precisely such edifying moral and theological digressions.

This issue is especially important for the martyr narrative in question because one of its famed features is the oddly stilted nature of the dialogue between official and accused it records. The "conversation" is in fact largely a series of non-sequiturs, so if one views this as a largely accurate transcription of an actual conversation, it naturally leads to a view of "Rome" and "Christianity" as fundamentally incompatible, a conclusion repeatedly drawn by Hunink: e.g. 'Though the AMS is short, it manages to depict the proconsul and the Christians as living almost in two different worlds, which seem to have little or nothing in common' (17), or 'The entire dialogue between the Roman magistrate and the group's spokesperson Speratus shows how their worlds are drifting apart: both men hardly seem able to understand the other one's basic notions' (18). That traditional way of looking at such interactions is my second concern. Such a simplistic binary opposition is, in my view, the main stumbling block to our proper understanding of early Christian experience and memory, since it homogenises a reality that was much more varied on the ground (multiple ways of being "Christian", more ways of being "Roman", and many of these in no way mutually exclusive) and thus often becomes an unthinking template that pre-judges our understanding of how Christians and Christianities evolved in the wider world of the Roman empire. In this case, Hunink's view of the accuracy of the transcription and his view of the fundamental incompatibility of Rome and Christianity are mutually enforcing: 'Taken as a whole, therefore, the AMS may well reproduce words that were spoken during a real court session, and so remain close to the original Roman judicial document. It shows a markedly wide gap between the world of the Roman state and the world of the small group of the Christians, a gap that proves impossible to be bridged by words' (20). But both assumptions are open to challenge, and without that framing other readings of this elusory fragment of early Christianity are possible. But those that make them will nevertheless be aided by Hunink's useful and thought-provoking new commentary.

[1] Indeed, one such oddity is that the manuscript title is in fact 'The Martyrdom of the Holy and Beautiful Martyr Speratus'.