Annemarie Steidl: On Many Routes 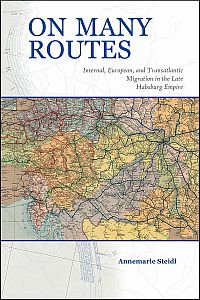 Human mobilities are complex and adaptable to change, but the categories used by state institutions to regulate and control migration patterns largely ignore the changing and fluid nature of migration patterns. Although many studies on migration in the last few decades have critically addressed these discrepancies, very few of them have had as their primary goal the thorough analysis of the multiple ways in which different types of mobility are interconnected.

In this far reaching analysis, Annemarie Steidl does just that. Focusing on the case study of the Habsburg Empire in the late nineteenth and early twentieth centuries, Steidl provides an innovative and meticulous study which convincingly shows that human mobility should be studied, and is best understood when different migration patterns (long-term and short-term, seasonal and permanent, domestic and international) are explored not as separate and independent from one another, but rather as integrated migration systems. In particular, Steidl shows that despite the spread of transoceanic migration in the Dual Monarchy in the 1880s, which has received great attention from migration historians, it still occurred less frequently than migrations within the empire and the European continent. These latter migrations have, however, been under-researched. Moreover, transoceanic migration did not simply replace preexisting migration patterns, but rather accompanied and transformed them. This web of interconnectedness was evident at the regional level, which, Steidl duly asserts, was and remains the best level at which to analyze human mobility and appreciate the dynamics which shape systems of migration at the macro, meso and micro levels.

To pursue her argument, Steidl provides a meticulous and critical analysis of a wide array of administrative sources: from Austrian and Hungarian statistics on internal migration and international population movement (1869 to 1918), census data from neighboring states to ship passenger records from Bremen and Hamburg to New York and local surveys. She explains the choice of the sources, the methodological problems they posed and the ways in which she has tried to extrapolate from these sources information regarding movements which were not recorded. The result is a nuanced picture which details not only the very different migration systems and policies which characterized the two entities of the Dual Monarchy but also regional and local communities within each of them. The rich empirical findings are brought into conversation with the relevant secondary literature on migration in the Dual Monarchy and, most importantly, in other European countries. The book includes visual representations of the mobilities it analyzes in the form of graphs and cartographic maps.

Steidl correctly argues that "there are some questions that can only answered by numbers" (16). Indeed, numbers are very much present and are a key component of the narrative, without making it just enumerative. Statistics shows that social status of migrants mattered for the Habsburg empire. Steidl also shows them as defined by gender, age cohort, ethnicity, and social and economic statuses, are all present here. Above all, the author devotes great attention to women in migration by showing that they were much more present in international and long distance migration than is recognized in the scholarship, challenging a well-established stereotype according to which women are predominantly present in domestic and short-term migration.

The book is organized in four thematic chapters. The first three chapters analyze internal, continental and transoceanic migration respectively. The fourth chapter explores ways in which these migration systems are interconnected.

In Chapter 1, Steidl analyzes patterns of internal migration in Imperial Austria and in the Kingdom of Hungary. The chapter makes a convincing case for the importance which internal mobility had before and during the spread of transoceanic migration. Moreover, Steidl provides compelling examples of the varieties of internal migration, which challenge the urban-centric approach (54) of migration research by showing that the importance of migration to urban population growth has been over-estimated. Movements from rural to urban settings were not the only movements to occur and were not always the dominant ones, as migration between rural areas and from cities to towns also took place.

Chapter 2 presents an in-depth analysis of international continental migration to neigh-boring countries and to Western European countries, as well as to the Russian Empire. One of the many valuable contributions here is the thorough empirical analysis of seasonal migration, which is an emblematic example of how different migration systems are interconnected. Steidl shows not only that seasonal and alternate work was also present in industry, thus blurring another common stereotype which perceives seasonal work as being primarily agricultural. She also explains methodological problems in researching these mobilities - e.g., people moving back and forth between Imperial Austria and the Kingdom of Hungary as seasonal workers were neither domestic nor international migrants (86).

In Chapter 3, Steidl shows that the spread of transoceanic migration could be explained as the geographical extension of long-distance migration patterns. In fact, she agrees with other authors that transoceanic migration was to a large extent motivated by the circulation of information which made a journey overseas attractive to professionals who pioneered transoceanic mobility. Steidl also makes a case for the importance of including return, which so far has remained a less-researched aspect of human mobility. The high rate of return migration from the Americas, which was as high as 40 percent for migrants from the Habsburg Empire, offers another compelling example of how long-distance migration should not be thought of as a permanent move. Back and forth movements across the Atlantic were common, and may have been even more recurrent than those taking place in short-distance or continental moves.

In the last chapter, Steidl brings together various forms of mobility to explore linkages and connections between domestic, European and transoceanic migration. With regression analysis of statistical data of political districts in Imperial Austria and counties in the Kingdom of Hungary, she assesses differences and similarities between and within regions in both parts of the Dual Monarchy. She concludes that internal migration was both an alternative to international migration and a trigger of international migration because it created and fostered aspirations of social mobility (189).

In the conclusion, Steidl offers a succinct and useful overview of the major changes in migration policies and migration patterns in the interwar period. Her study neither embraces a theoretical framework nor seeks to propose a novel theoretical approach, yet the rigorous and innovative analysis she provides offers a valuable starting point for theoretical discussions on the crucial topic of interconnectedness of migration systems. Beyond that, the book is a great achievement which will be of interest to scholars well beyond those working on the Habsburg Empire and on European migration in the period from the late nineteenth century until World War One as analyzed in the book. Steidls compelling and rigorous analysis will be read with great profit by anyone who has an interest in empirical and methodological aspects of migration research in any time and space.