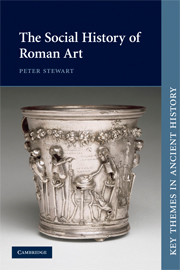 The publication of a new handbook on Roman art used to be a relatively rare event. Recently, however, such books have started to appear with ever greater frequency. 2007, for example, saw the arrival of Fred S. Kleiner's, A History of Roman Art, and Paul Zanker's, Die Römische Kunst (now also issued in Italian translation, with many more illustrations); and more such books are apparently on the way. [1] To this already crowded field we must now add Peter Stewart's new survey - his second attempt at the subject in four years. [2] What, one may reasonably ask, is going on? Why are so many prominent scholars of Roman art suddenly investing so much time and energy in writing general or introductory texts?

To answer this question one need look no further than Stewart's thoughtful introduction (1-9), where he adduces two main reasons. First, there is a new and increased interest in all the products of Roman art on the part of ancient historians. Monuments, images, and art objects - as 'part of the very fabric of Roman life' (1) - are now universally recognized as important primary evidence for the writing of cultural history. In other words, the audience for introductory texts to the subject has dramatically increased. Second, there is widespread dissatisfaction among specialists with the way that Roman art has been defined up to now, and with the 'master-narrative' that has been conceived for it. To put it crudely, Roman art and Roman monuments have in the past generally been deployed merely to enrich the story of the dramatic rise of Rome, and the city's acquisition of a Mediterranean empire. Textbooks have been organized chronologically. The monuments are divided first between Republic and Empire (with the art of the Republic mostly lost); and then the art of the empire is presented, subdivided into discrete periods according to the ruling dynasties. So we end up speaking of 'Julio-Claudian art', 'Flavian art', and so on. In other words, developments in the visual arts have been forced to follow political history - the history of events; and the emphasis has accordingly been on the imperial court, and the life and experience of the Roman elite: the ruling class, that is, who shaped Roman history and commissioned most of the public monuments. It is discontent with this kind of presentation that lies behind Stewart's current enterprise. Hence his title: 'The Social History of Roman Art'. Like some of the other authors of recent handbooks, Stewart desires a new, more inclusive 'master narrative' for the subject. And he finds it in social rather than political history. [3] More specifically, he locates it in a 'contextual' address to the material, emphasizing the way that the visual arts functioned in Roman society; and in key issues like 'economic and social class, gender, and audience reception' (5). Stewart aligns his approach, broadly, with the 'New Art History' of the 1960s, which he openly concedes 'is no longer new' - not even in the study of ancient art (5). But in the field of Roman art, as he puts it, 'the idea of concentrating on the social history of art continues to generate new perspectives' (5).

The book is organized thematically, rather than chronologically; something that was also true of the author's previous book on Roman Art. But the order in which topics and genres of Roman art are addressed is strikingly different - almost the exact reverse. Some scholars have proposed that we should abandon the word 'art' when speaking of the Roman world, and use terms like 'images' or 'visual culture' instead. Stewart argues vigorously to retain 'art' (2-3). And in answer to those who have emphasized the role of the patron (the commissioner, customer, or purchaser) in shaping Roman art, the author begins his survey with a wide-ranging chapter on artists and their inherited craft-traditions ('Who made Roman art?' 10-38). Traditional handbooks on the subject tend to start with important public art - temples, basilicas, imperial monuments, official portraiture, coins and so on. Stewart, in his second chapter, takes precisely the opposite course, and first addresses the private realm: specifically, the house, and the tomb ('Identity and Status' 39-76). The reader is treated to a broadly sociological account of domestic wall-painting and of funerary monuments, including a substantial discussion of carved sarcophagi (70-6). In a sense this is an even more radical move. For the implication is that these two 'sites of self-representation' may actually be more important for the construction of identity within Roman society than was the public realm. A chapter on portraits follows ('Portraits in Society', 77-107), and then one on the imagery of public life ('The Power of Images', 108-42). With these chapters finally we arrive at what is normally considered the core of introductory accounts of Roman art. The final chapter ('Art of the Empire', 143-72) looks, at first sight, as if it will contain an account of the art of the Roman provinces. But it turns out to be mostly devoted to the complex relationship between Greek and Roman art - a thorny problem of definition that art historians usually confront in the introduction. Naturally enough, as the last chapter it also includes Stewart's most substantial discussion of the art of late antiquity (166-72). The result is inevitably disappointing. The vast category, 'art of the provinces', ends up being compressed into a short subsection entitled 'Provincialism' (155-62) that, although it glances briefly at Delos and Aphrodisias, deals mostly with Roman Britain - in no sense a representative example of Roman visual culture in the provinces.

The great strength of this book lies in the directness and honesty with which all these subjects are addressed, and the intelligence and open-mindedness with which they are discussed. Stewart is a thoughtful writer, and well informed. His (sparing) footnotes provide an up to date bibliography, in English, on almost every topic he covers. He goes out of his way to correct modern popular misconceptions: that portraits were predominantly commissioned by those they represent, for example (101-7); or that Roman public monuments served as a kind of 'state propaganda' (108-27). He asks the right questions. But perhaps most importantly, he is not afraid to leave matters open when the field has not yet provided satisfying answers. It must be admitted - this is not a conspicuous virtue of the other existing handbooks. [4]

The greatest weakness, without any question, is the paucity - and the relatively poor quality - of the illustrations (43 half-tone images). These can give the reader no indication of the aesthetic qualities - the sheer visual impact - of Roman monuments. Stewart's book is clearly not intended to compete with popular textbooks, like the well-illustrated English-language volumes by Ramage and Ramage or Fred S. Kleiner, with their abundance of color photographs. [5] (This is presumably what the author means, when he says - at the very end - that his new book 'is not a handbook or introduction to Roman art' (173)). Nevertheless it could usefully be assigned to beginning students alongside one of the standard texts, to open up different perspectives on the subject, and encourage further discussion. For this reason alone, the book should be welcomed.

[1] Fred S. Kleiner: A History of Roman Art, Belmont 2007; Paul Zanker: Die Römische Kunst, Munich 2007; a new textbook of Roman Art is also being planned by Thames and Hudson, apparently to be written by Sue Alcock and Jas Elsner. This would be the second such general treatment authored by Elsner; see also his, Imperial Rome and Christian Triumph, Oxford 1998.

[3] This inclusiveness of approach is also seen in illustrations, which include some very humble products indeed (e.g. figs. 31, 37-41). The author gives a fuller account of his aims in the interesting bibliographical essay with which the book concludes (173-6). He singles out Eve D'Ambra: Art and Identity in the Roman World, London 1998, as an important predecessor (173, 175); but also commends a series of other studies, notably: John R. Clarke: Art in the Lives of Ordinary Romans, Berkeley 2003; Eve D'Ambra / Guy P.R. Metraux (eds.): The Art of Citizens, Soldiers and Freedmen in the Roman World, Oxford 2006.

[4] The author also repeatedly draws attention to the inadequacy of our evidence, the difficulties of interpretation, and the necessary selectiveness of his own discussion. Indeed at the very outset he highlights the shortcomings of introductory books in general ('Caution', 7-9).