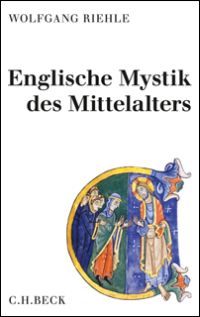 The publication of Wolfgang Riehle's Englische Mystik des Mittelalters emblematically coincides with the appearance of The Cambridge Companion to Medieval English Mysticism. [1] This latter volume, the result of the joint effort of thirteen authors, celebrates the long overdue "modern, comprehensive single-volume work which delivers a sustained discussion of medieval English contemplative and mystical texts, authors, readers, and communities." [2] Although it is not decent to squint with an eye on the celebration next door, I have many reasons to read Wolfgang Riehle's book in the light of the Cambridge Companion volume.

In his assessment of the conference "After Arundel" (Oxford, 2009), Nicholas Watson voiced his regrets over the lack of comprehensive publications of a longue dur&#233e. His call for such ambitious scholarly endeavours may be answered by the Cambridge Companion volume, but its multi-authored concept uncomfortably reflects on Watson's urge. Comprehensive monographs may be issued from collective authorship but questionably achieved by individual efforts. Scholarly suspicions vis-à-vis comprehensive monographs are nourished by doubts in the raison-d'être of a work encompassing a plethora of facts and interpretations that would soon be countered and out-dated by the ever-growing scholarship. In this highly unfavourable climate, Wolfgang Riehle has assertively crowned his scholarship by a single-volume and single-authored book, written in German.

The corpus of texts involves a much wider range of writings than the traditional English mystical "canon" under the scrutiny of Wolfgang Riehle's earlier book. Besides the chapters devoted to each figure of this canon (the Ancrene Wisse-author, Richard Rolle, The Cloud-author, Walter Hilton, Julian of Norwich and Margery Kempe), briefer sections on individual authors (Aelred of Rievaulx and Marguerite Porete) and anonymous texts (the Katherine Group, the Wooing Group, the Talkyng of the Loue of God and the meditations of the monk of Farne) are inserted in the overall narrative. The frame for this narrative is provided by an introductory first chapter on the beginnings of the European anchoritic tradition and its spread to England, as well as by an "after-thought" on the popularization of mystical texts and theology by late medieval devotional texts and the medieval stage.

As Wolfgang Riehle admits, conceptualizations of any narrative, based on the continuity of textual creation, are seriously countered at least by two factors: by wide lacunae of textual creation in much of the earlier part of the period and by the epistemological problem of what constitute the mystical experience and its textual representations. Nevertheless, the author constructs a narrative which provides a cultural and historical context for the mystics and their texts. One of the two leitmotivs of his narrative is the anchoritic tradition, which the author considers the cradle and the permanent source of inspiration for later medieval mysticism. The second key element of the narrative is the overwhelming presence of Cistercian spirituality in medieval English mysticism. Wolfgang Riehle asserts that scholarship has overrated the influence of Franciscan spirituality. He proposes to reconsider mystics' indebtedness to early Cistercian expressions of devotion and introversion. He casts doubt on the role attributed to the Carthusians in the dissemination of devotional texts and practices in the 15th century. He argues for an uninterrupted and unrivalled Cistercian spiritual hegemony all throughout the period.

While Wolfgang Riehle prudently reflects on his earlier views, he is less considerate in assessing ongoing scholarly discourses. His responses to feminist criticism are occasionally more polemical than argumentative, discrediting gender-based attempts as ahistorical (292). The chapters on the anchoritic tradition, Richard Rolle and Julian of Norwich provide as much a profound survey of the respective texts as a straightforward, though not always supported, opposition to the overpowering presence of Nicholas Watson: "Auf die Diskussion der sogenannten 'vernacular theology', die vor allem von N. Watson angestrengt wurde, gehe ich nicht ein, weil ich sie für höchst problematisch halte" (522, n. 106). Finally, some questions that seem to be ignored by scholarship, as the author claims, had already been researched and published prior to this book. The resonances of Marguerite Porete's Mirouer in England and its connections with Free Spiritism have been studied by Kathryn Kerby-Fulton's Books under Suspicion (Notre Dame, 2006). Furthermore, Wolfgang Riehle's insistence on a continuity of Victorine spirituality and English mysticism has been anticipated by Denis Renevey's Language, Self, and Love (University of Wales Press, 2001), which the author cites in his bibliography.

As a scholar inexperienced in writing comprehensive works, I am prone to admit that it is close to impossible to balance between individual interpretations and responses to contemporary scholarship. On the other hand, I cannot but acknowledge Wolfgang Riehle's merits in balancing between a retrospective survey of scholarly material and an opening up of new paths. Especially thought-provoking are his discussions of Ancrene Wisse in the context of the St. Trudperter Hohenlied, his suggestions of female authorship and a context for the Talkyng of the Loue of God, his contextualizing Rolle's melodious mystical experiences in contemporary theories of music and his presentation of Julian of Norwich's struggles with Paulian contradictions.

Wolfgang Riehle targets a wide spectrum of readers. His book is student-friendly, as its chapters are also self-standing units. The author's expertise in translating English mystics and his reflections on texts crossing language borders will appeal to historians of language and translators of medieval mystical texts. The book will probably be a useful mediator of the medieval English mystical landscape and current Anglo-American scholarship to Central European scholars of medieval spirituality for whom German still remains a more easily accessible language than English. Yet, I can only wish that this book be translated into English so that it may join "insular" dialogues and become a real companion to the Cambridge Companion of English Mysticism.