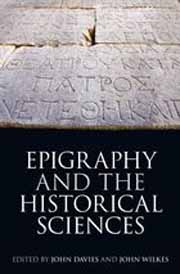 All historical writing depends on a division of labour. The technical work of organising and interpreting particular classes of evidence - oral traditions, material culture, élite literary works, print and manuscript archives - is naturally devolved to small specialized corps de métiers (codicologists, papyrologists, and so forth). These various auxiliary crafts, although without any claim to be separate intellectual disciplines in their own right, each have their own distinctive methodology and skills. Many have their own journals, conferences, and professional associations; some, such as archaeology, have even developed an institutional quasi-independence in the modern university-system.

This division of labour brings the risk of a two-way failure of communication. First, individual guilds may get so caught up in the intricacies of their particular applied craft as to lose touch with wider currents of historical thought. Students of Greek and Latin inscriptions have not been immune from this: consider, for instance, how in the late twentieth century a small group of Anglophone scholars effectively killed off the study of fifth-century Attic epigraphy by their relentless focus on problems of relative and absolute chronology. Second, and still more seriously, social, political and economic historians may be so intimidated by the baroque technicalities of (say) epigraphical or papyrological artisanship that they shy away from using inscriptions or papyri in their work altogether.

The relationship between epigraphy and the wider historical sciences was the leading theme of the XIII International Congress of Greek and Roman Epigraphy (CIEGL), held in Oxford in September 2007. The fourteen papers collected in this volume, all but one of them plenary lectures delivered at the Congress, all share the aim of demystifying the study of Greek and Latin inscriptions for the wider historical profession. When and why should historians pay attention to epigraphic evidence? What sorts of things can inscriptions tell us, and what can they not tell us, about ancient societies? What's new in the field, and where is the exciting work being done?

Individual chapters are addressed to students of personal names (Denis Feissel), Greek and Roman religion (Robert Parker and John Scheid), the Greek language (Georg Petzl), population and demography (Christof Schuler and Walter Scheidel), Greek power-structures and the Roman imperial state (John Ma and Alison Cooley), Graeco-Roman economic systems (Alain Bresson and Giovanni Salmeri), and oral culture and the emotions (Angelos Chaniotis). Three papers, finally, are concerned with how epigraphists can best go about communicating their work to a wider audience, through museum-display (Isabel Rodà) and the internet (Silvio Panciera and John Bodel). Space forbids extended discussion of every paper, and I shall focus on a few highlights.

Robert Parker (17-30) explores the paradoxical position of epigraphic writing in the study of Greek religion: if 'the typical vehicle of Greek ritual knowledge is oral tradition' (19), when and why did the Greeks choose to produce written instructions for ritual conduct? Parker envisages three possible scenarios: local exceptions to commonly accepted norms ('Incense Is Not Brought' - i.e. not in this sanctuary), cultic innovation ('the Mykonians decided to make the following sacrifices in addition to the existing ones'), and insurance against unusual ritual emergencies ('What to do if you are attacked by a demon').

Christof Schuler (63-100) is interested in how we can use votive and expiatory monuments as an index of cultural differences between the urban and rural societies of western Asia Minor. Far from being 'worlds apart', the town and country in fact shared a set of common concerns and institutional practices: the rural population 'enjoyed a productive relationship with the urban milieu and [...] selected from the available stock of epigraphic forms the ones which were most appropriate to their interests' (90-91).

Walter Scheidel's paper (101-129) is a model demonstration of what epigraphy can and cannot tell us in the field of ancient demography. Scheidel shows that epigraphic evidence is of crucial importance for only a few, very specific demographic problems (e.g. seasonal mortality-rates). For most questions (e.g. age at marriage), inscriptions can be used only with extreme caution, and several key demographic variables (total population sizes, human mobility) are simply not illuminated by epigraphic evidence at all. Indeed, in some areas, the epigraphic evidence is positively misleading. Funerary inscriptions recording the age of the deceased seem at first sight to offer a wealth of evidence for ancient life-expectancy. However, uneven patterns of commemoration in fact render this material statistically worthless: so Greek-language inscriptions from the city of Rome imply a mean life-expectancy of 51, while Latin-language inscriptions would suggest a mean of only 23.

These are revolutionary times for the study of the ancient economy. A wave of scholars, primarily in the United States, have rejected the Weberian economic anthropology of Polanyi and Finley in favour of a modified neoclassical approach, accepting the postulate of individual and collective economic rationality, albeit within historically specific institutional constraints ('new institutionalism'). Both Alain Bresson (223-247, full of missionary zeal) and Giovanni Salmeri (249-267, rather more ambivalent) convey something of the excitement and vitality of current work in this field.

However, neither author can hide the fact that epigraphy has simply not been very prominent in the recent economic history of antiquity. The greater part of Salmeri's chapter is not concerned with epigraphic evidence at all. Although Bresson nicely shows how various individual texts can shed light on particular historical problems (e.g. Sophytos of Kandahar and his 'start-up capital', teknophoron argyrion; the Athenian law of 375/4 on counterfeit silver coinage), he too repeatedly downplays the usefulness of epigraphic sources per se: 'As for long-term trends of exploitation of the Greek chōra, epigraphy cannot as such directly offer a significant or decisive contribution' (228); 'As for prices and quantification, inscriptions are indeed not the ideal source' (234).

Given the volume's aspiration to 'present epigraphy as a specialism to a wider readership' (xi), it is a shame that only one chapter (Isabel Rodà's admirable account of recent innovations in museum display) includes any images of Greek or Roman inscriptions. Nonetheless, many of the individual chapters, especially those by Parker, Scheidel, Ma and Chaniotis, will be read with profit by undergraduate students. This splendid and accessible volume is strongly recommended to all historians of the ancient world, and not merely those who use (or who think they ought to use) inscriptions on a day-to-day basis.