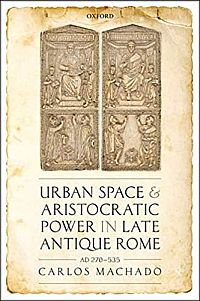 From the second to the sixth century AD the character and role of the urban elite changed dramatically within the Roman Empire, particularly within Rome itself. The governmental reforms of Diocletian and Constantine concentrated power within the hands of the urban prefecture, who were often aristocrats of the senatorial class. Aristocratic power within Rome had for centuries been expressed through building projects funded by the senators, and this continued throughout late antiquity. What changed was the focus of the construction, with a shift of emphasis from the building of new temples and monuments to the restoration of existing structures and the construction of churches. The spaces of power within the city remained relatively similar, with senatorial homes, the palace and, perhaps most importantly, the forum serving as areas where power was expressed and reaffirmed to the people. However, as power became centred in the hands of the urban aristocrats in the fourth and fifth centuries AD, the nature of these spaces changed with a greater emphasis placed on the generosity of the urban elite and a return to the habit of the late Republic, where senatorial homes acted as important political and social spaces within the city of Rome.

Carlos Machado's principal focus is on the urban elite within the city of Rome in the last centuries of the Roman Empire and the subsequent Ostrogothic Kingdom. Machado is particularly interested in how the aristocratic class appropriated power within late antique Rome, and how by increasing their involvement in the government of the city they changed and redefined the urban spaces of Rome, granting new political and social definitions to these areas. As power had become centred in the hands of the urban elite, the manner of public construction and dedications changed. Whereas during the Principate public building works were the purview of the Emperor, by late antiquity the role played by the aristocratic elite was becoming more tacitly acknowledged via inscriptions. To Machado, this is a clear indication of the increased power and political ambition of the elite of the late Empire. Similarly, the growing power of Christianity was reflected in late antique Rome but, as Machado states, the role the elite played in this conversion was similar to their patronage of paganism, with the construction of churches and basilica showing remarkable similarities to the earlier construction of temples. Machado also highlights how during the late fourth and early fifth centuries AD new construction began to decline, with an emphasis instead being placed on the reconstruction of older landmarks, often using material stripped from earlier public buildings and homes. To Machado this symbolises the declining importance of Rome and, by extension, the senatorial class itself.

The main thrust of Machado's argument is that as the Emperors gradually withdrew from life in the city of Rome from the early fourth century AD, more power became centred in the hands of the urban aristocratic elite. This centring of power in the hands of the senatorial class changed the topography of the city of Rome, leading to the development of multiple disparate loci of power. As Christianity spread during the late fourth and fifth centuries AD, the representation of senatorial power gradually changed, further altering the spaces of power in Rome. Machado does not engage in the debate surrounding the struggle between paganism and Christianity and thus is able to convincingly show how connected these two faiths were in Rome during late antiquity. In particular Machado emphasises how the construction of churches and temples served as physical representations of the piety and generosity of the aristocratic elite. By focusing on the similarities in the engagement of the elite with these faiths he highlights the role of the urban aristocrats in the changing makeup of faith in the late Empire. As he notes, the elite had played a significant role in the religious life within Rome for most of its history, and as the faith within the city changed so too did the way that urban spaces were defined. Machado emphasises how the developing role of the senatorial class in Rome drastically altered the face of the city, and by studying this we can see the change in the involvement and importance of the senate within the government.

Machado's book approaches the topic of the urban aristocratic elite from a unique perspective, melding a wealth of primary and secondary sources regarding the topography of Rome and the increased role played by the aristocrats in the late Empire. Whilst these topics are well discussed within the field, Machado does an excellent job of highlighting the connection between the two of them from a fresh angle. Late antique Rome is a well-researched area of study, but by highlighting the role of the elite in the shifting topography of power of late antique Rome, and supporting this with a wealth of primary and secondary evidence, Machado is able to approach the topic from a novel perspective. Many other books that deal with spaces of power place their focus on the impact of the Emperors or Christianity on the topography of Rome.

Some historians choose to concentrate on one particular structure or type of building, such as Dey's book on the Aurelian Wall and its effect on Rome. [1] Whilst this book is notable for the manner in which the author is able to highlight the impact the Aurelian Wall had on many of the developments which occurred during late antiquity, it suffers from its exclusive focus on the Aurelian Wall. In contrast, Machado's expansion of his subject to the study of multiple spaces of power that existed within late antique Rome allows for greater depth in the analysis of changes in the city during the later Empire. The avoidance of focus on the role of the Emperors during this period enables Machado to combine the changing political nature of the late Empire with developments in the topography of the city. By tracking essential key spaces of power, such as the forum, senatorial homes and temples, Machado is able to highlight how and why these spaces changed over the centuries more readily than authors like Chenault, whose narrow focus on senatorial statues lacks the variety of evidence used by Machado. [2] This in-depth analysis on these key spaces where power was shown, replicated and emphasised, allows Machado to explain how the role of the urban aristocracy in Rome changed from the second to the sixth century AD as a result of governmental reform and the withdrawal of the Emperor from urban life in Rome.

A particular strength of Machado's book is the inclusion of archaeological plans of the forum, churches, basilica and the houses of the senators. These plans enable Machado to illustrate to the reader the way in which urban spaces were used by the aristocratic elite to express their power. In addition, Machado makes excellent use of epigraphic evidence such as inscriptions in churches and on statues of senators in the forum. Through analysis of the changes in these inscriptions during late antiquity, Machado emphasises how the changing language, particularly on the statues of senators, is an indicator of the increasing role and power of the senatorial elite, which he hypothesises is a result of the gradual withdrawal of the Emperor from urban life in Rome. The combination of epigraphical, archaeological and written primary evidence used by Machado gives far greater weight to his argument.

The use of examples of written testimony by senators and how they used their political positions allows Machado to track how their interests, power and wealth changed in late antiquity. Senators such as Symmachus became increasingly important political and governmental figures during the late Roman Empire, and Machado uses his writings and epigraphical evidence to indicate how these senators represented their power through building projects and donations, and placed great emphasis on having held key magisterial roles such as that of Urban Prefect or Consul. Machado highlights the importance of these political roles within the city of Rome by showing how position was used for political purposes, such as during Maxentius' usurpation in the early fourth century AD, where to gain support for the usurpation two tribunes in charge of food distribution gave large rewards to the citizens (31). This illustrates how the aristocratic urban elite could take advantage of positions of authority to influence the populace to support their goals and aims, and confirms the expansion of the role of the aristocrats within the management of the city.

Overall, the strength of Machado's argument lies in his intertwining of the roles played by the senatorial class and the changing topography of Rome. Machado achieves this by combining literary, epigraphic and archaeological evidence. This combination provides greater evidence for his argument, hence granting his conclusions greater weight. For much of Rome's history the aristocratic class had been one of the major benefactors of public works, only surpassed by the Emperors, a trend which was reversed during the late Empire. By analysing this reversal, Machado is able to demonstrate how the spaces of power in Rome changed through the actions of the senatorial class, which he believes altered the topography of Rome significantly.

It must be considered that the natural decay and reuse of many statues, inscriptions and public works, in addition to a lack of evidence of the senatorial class as a whole, does mean that assumptions are required on Machado's part, but these are few and are supported by the varied sources used to illustrate his arguments. The focus on Rome allows for an in-depth analysis of how urban spaces could reflect aristocratic power in the late Roman Empire, but by definition it narrows the perspective. Thus, we are unable to see how the provincial elite might have chosen to demonstrate their power during the late Western Empire, as although Rome remained amongst the most important cities in the late Empire there was a decline of centralised authority in the West, particularly during the fifth century AD. In addition, aside from the gradual decline in construction of public buildings there is little mention of how the fall of the Western Empire affected the senatorial class, with the exception of a brief passage in the conclusion. More investigation into Rome under Ostrogothic rule could have strengthened Machado's argument, allowing us to see if the trend of Rome's decline continued, or was accelerated by the Gothic War of the sixth century AD. This possibly warranted further investigation, as it could have provided a fascinating glimpse into the continuing transition of Rome from the capital of the known world to the heart of Roman Catholicism.

This book is an adept study into how the increasing power of the aristocratic class within Rome was reflected by the urban spaces of the city. Machado does an excellent job of showing how urban spaces acted as the personification of the power of the senatorial class. His focus on the spaces of power, with the use of plans to emphasise his arguments, provides a fresh perspective on the role of the elite within Rome during late antiquity. This focus provides tacit, physical evidence which facilitated understanding of how the operation of Roman society changed from the second to sixth century AD, and the role of the urban aristocratic elite in these changes. Machado's book is a worthy addition to the field due to the convincing manner in which he connects the disparate strands of topography, Christianity, and the growing power of the elite. This excellent book deals with highly technical ideas, and whilst Machado explains these well, the book remains more suited for study by academics. I would highly recommend it for those who are interested in how the dynamics of power changed within cities during the late Roman Empire.