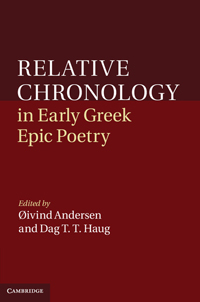 This volume, originating from a conference in Oslo in the summer of 2006, discusses the relative chronology of different Greek epics composed during the archaic period (the eighth to the sixth century BC) and the internal chronology of the Iliad and the Odyssey concerning the different stages of composition and the resulting layers in the extant works. The papers approach the problem from both the linguistic and thematic point of view. The collection starts with the introduction by the editors highlighting the principal problems and some possible solutions in previous research and the present volume. The following papers proceed from linguistic argument towards thematic dependency between the poems, beginning with Richard Janko's relative chronology formulated according to the epic diction, and ending with a different dating put forward by Martin West on a thematic basis.

Janko summarises the principal points of his thesis of 1982. [1] He accepts some criticism, but maintains that this will not disprove the existence of an Aeolic phase of the epic tradition preceding the composition of the extant poems by the Ionic poets, which allows us to regard the aeolisms in the epic diction as gradually declining archaisms, and to view their frequency in particular poems as indicative for relative dating. He consequently restates his opinion that the linguistic evidence is conclusive for the sequence: the Iliad - the Odyssey - the Theogony - the Works and Days - the 'Homeric' Hymns. Moreover, he points out that the Hesiodic Catalogue of Women, which is usually thought to belong to a later poet, could well be composed by Hesiod himself. Janko's linguistic argument is contested by Brandtly Jones denying the Aeolic phase before the Ionic one, and arguing for a continuous Ionic epic tradition spanning from the Bronze Age directly to the archaic period. Under this model the aeolisms could have entered the tradition at any time during this long development and cannot elucidate the chronology.

The next papers focus on the significance of the linguistic novelties in the Homeric poems. Rudolf Wachter suggests that the 'modern' forms introduced by the poet of the Iliad and the Odyssey from his contemporary vernacular Ionic could have been used in the everyday language long before that. Homer could have been personally responsible for the 'modern' Ionic features, but this innovation was hardly noticed by the audience. Margalit Finkelberg connects the less formulaic language of the Homeric speeches, compared to the main narrative, with the innovative outlook they express, and suggests that the speeches represent the most recent layer of the Homeric amalgam of traditional and modern features, giving thus the best insight into the attitude of the poet. Dag Haug regards the use of the so-called tmesis (the separation of the particles from the verbs inherited from the earlier epic dialect) as a conscious stylistic choice of every poet, which reflects individual authorship not the general chronology.

Georg Danek's discussion of the Doloneia inaugurates the papers approaching the composition of the Iliad and the Odyssey from the thematic and mythological point of view. Danek argues that the Doloneia poet not only systematically violated the 'Homeric' practice of presenting the events as taking place one after another, but demonstrated that he did it deliberately. Danek views this as a proof that the Doloneia was included into the Iliad when the latter was already fixed as a written text, otherwise its poet would have done away with the difference. Stephanie West discerns four stages in the composition of the Odyssey gradually expanding from an originally rather simple poem of husband's return and revenge. The inconsistencies resulting from the successive additions were easily bridged by the audience during the normally episodic performance of the poem. Øivind Andersen shows how the poet of the Odyssey uses the figure of Heracles for reflecting the main action, presenting the hero as a bowman whose acts parallel, and contrast, the archery of Odysseus in the climax of the poem.

The last papers in the volume address the problem of interrelationship between different poems and mythological traditions. Ian Rutherford points out that the fragmentary nature of the material concerning both the Hesiodic Catalogue of Women and the other epic poems makes the more or less exact relationship between them, and thus their relative dating, unattainable. In many cases we are dealing with a dialogue not between different poems but between narrative and mythological traditions, and should speak of 'intertextuality' and 'traditional referentiality' rather than detect concrete allusions. He accepts that Book 11 of the Odyssey is more likely to rely on the Hesiodic Catalogues than vice versa. The model of 'textless intertextuality' is pervasively followed by Jonathan Burgess who views the epic phrase megas megalosti and the phraseology concerning the child Astyanax as based on the mythological traditions which were often represented with regular employment of certain context-specific and/or character-specific phrases. He demonstrates that in the case of Astyanax the primary context is given within a fragment of Cypria, while the Iliad and the Odyssey use the motifs in secondary contexts. Bruno Currie's comparison between the 'Homeric' Hymn of Demeter and the partially preserved hymn to the goddess ascribed to Orpheus takes a more neo-analytic approach. He argues that the Orphic hymn was the more traditional and the Homeric one more innovative of the two, and that the latter presupposes an audience familiar with specific scenes, motifs, verses and phrases that were employed in this context, which suggests an allusion to a particular poem with a fairly fixed text. Wolfgang Kullmann suggests that the poet of the Iliad adapted the Catalogue of Ships as a fixed text where the list of the cities was taken from the contemporary world of the early seventh century BC, and was distributed among well-known characters of the myth.

The concluding chapter by Martin West brings the discussion back to the dating in the most direct sense. West offers a lucid and updated synthesis of his views, restating the dating of Hesiod before the Iliad, the Iliad before the 'cyclic' poems, a number of them before the Odyssey, and the Odyssey before the Lesbian poets composing ca. 600 BC. This places most of the epics to the seventh century BC, beginning with Hesiod ca. 670, while leaving the Cypria, the Teleogonia and the 'Hesiodic' Catalogues to the sixth.

All together, this is a high standard collection presenting different approaches and arriving at contradictory results, avoiding any attempt of forming a common opinion (which would be quite hopeless, as admitted in the introduction (9)). Somewhat regrettably it ignores the 'evolutionary model' of Gregory Nagy, [2] and the dating of the Homeric poems to the sixth century BC, [3] which would have contributed to the completeness of the picture. Nevertheless, the volume admirably demonstrates the wide range of possibilities and the lack of compelling evidence for dating the epics. This clearly warns against accepting any chronology as 'factual', and strongly recommends a broad synchronic approach to the early Greek poetry. By inference, this questions any reconstruction of the archaic Greek history built on a more or less exact sequence, or dating, of the epics.