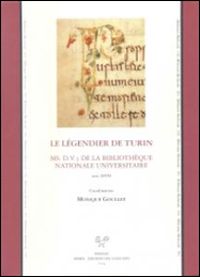 One of the oldest surviving collections of Latin saints' lives in the world now resides, in surprisingly good shape, in Turin, at the Biblioteca Nazionale Universitaria as Ms. D.V.3 - or you can call it by its nickname, T.

The codex was most likely made around 780 or 790, probably at St-Médard in Soissons, possibly by nuns, but even when it was new, it was old: the saints in its selection are mostly ancient martyrs (including many somewhat "exotic" eastern Mediterranean imports), and it was written in a cursive ab miniscule that was meant to look archaic.

From the very start of this manuscript's long history, then, the chronological frames within it were thickly layered. They continued to pile up: at some point in the next two centuries the legendary made its way across the Alps to the Italian Piedmont, possibly ending up at the monastery of Novalesa. In Italy a new production team added notated chants (some of them very old) to a few parts of the codex, "corrected" its Latin, and modified some of the texts: if this was happening at Novalesa, this activity may have been part of the monastery's renovation of its own past in the mid eleventh century, but it's also possible that the emendations were made earlier. Eventually the codex wound up in Turin, most likely as one of the 14.000 books that Carlo Emanuele I gathered together and displayed within his spectacular Wunderkammer - la Grande Galleria, a sampling of the entire cosmos in the heart of the Duchy of Savoy. If the book was part of that princely treasure, it would have survived the fire that gutted much of the Galleria in 1659, only to survive another serious fire that hit the university library (which had since acquired the ducal collections) in 1904.

We are fortunate that many people have valued this codex so highly, because even as T changed hands and moved through the ages, its most fascinating history was embedded all along within the pages that its series of owners preserved. Monique Goullet and her research team have produced their own treasure for making that history so accessible. One of the publication's main contributions is to replicate the language of the texts as they were originally copied, which traditional editions typically obscure, and the result is a freeze-frame of linguistic history: T's Latin is late Merovingian Latin, sometimes glazed over texts that are much older, so its orthography and morphosyntax bear the imprint of late antique literature but also early medieval speech patterns. The volume also establishes what is distinctive (or not) about the manuscript's paleography, codicology, music, and hagiography, which will make it the best sort of companion in the archive, either for studying T itself or other legendaries related to it.

Just as exciting, this edition and study plunge us into a culture that analysts of hagiography are more accustomed to sample from the shoreline. Studies of hagiographical collections are not as common as studies of individual texts, but maybe they should be. Hagiography was part of the present but also part of the past: it glutted on tributaries of older traditions while remixing and recombining them and shifting its own course. To read a legendary, especially one with a guide this good, is to sense how energetic and relentless this interplay was.

The volume does not plumb the depths of T's discursive layers or the contexts of its cultural production. That wasn't the goal. Rather it makes that kind of work far more possible by outlining each text's distinctive features and histories in order to better measure what is new. For example, one could compare the striking array of models of femininity that coalesce in subtle contrasts and alignments - such as the nun Luceia who becomes a lucky charm for the barbarian king Aceia, the prostitute Afra who is confident in God's forgiveness but nevertheless thinks she deserves to die (and who can blame her in a codex full of slurs against prostitutes?), the nameless Jewish matron who twice tries to torture her Christian servant by locking her in a room and sealing the doors with wax, or Natalie, the real star of the Passio Adriani, who held her husband's hand to comfort him even while it was being amputated by a pagan persecutor. Many texts in the collection also share a fascination with the question of what Christianity might look light to outsiders: some texts accentuate the weirdness of virginity, others like thinking about how almsgiving seems strange, and some stress how much of an imaginative leap it takes to see religious kinship as a kind of blood.

Considering the legendary as a whole also draws out the texts' quirks. Gordon Blennemann notes some surprising parallels between the Roman/Egyptian saint Eufraxia and Venantius Fortunatus' portrait of Radegund of Poitiers, and yet even in light of her predecessors Radegund's self-inflicted tortures still seem extreme in these pages. Some texts have a sly sense of humor: among the many inventive dialogues that transpire between persecutor and prisoner in T's passion texts, the very brief Passio Chirilli has the Roman official tell Chyrillus that as an old man, he should take his age into account as he chooses between sacrifice or execution. Chyrillus holds his ground; he also insists that he is not even that old. Conversely while some saints stick out, others blend in, and it is not always the ones you would expect. For instance, the next-to-youngest figure in this collection, Remigius of Reims, is not the famous baptizer of Clovis as he was remembered in Merovingian histories and hagiography but instead (as Marie-Céline Isaïa points out) a rather bland bishop with all the history scrubbed out of him.

A few technical notes: not all computers are equipped with disk drives these days, so it may be inconvenient for some readers to use the digital features of this publication, which are all accessed through the DVD, including the material online. The interface also lacks a single text file or page that groups all the texts together (either in the original or corrected versions), so researchers interested in conducting quantitative analysis of the entire collection will have to work a bit to build their own dataset from the individual files/pages. But that would not take long, since there are only forty texts altogether; and in any case, as Goullet demonstrates in a comparative analysis of vocalic switching, the most important unit of linguistic analysis for T is the individual text, rather than the scribe or the collection as a whole.

This is an enormously productive platform for exploring the histories T holds within it. And medievalists who are not already working in sociolinguistics, réécriture, or codicology will find here a reason to care about them: our maps to the imaginative landscapes of the Middle Ages are very often hagiographical, and studies of the manuscripts that made those maps help us know how exactly Christians knew their saints, and even better how they were using saints to think about themselves.