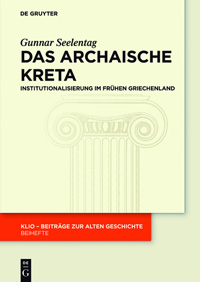 Not so long ago the study of Archaic Crete was a somewhat neglected field, of interest principally to British, French and Italian scholars. No longer. This lengthy and detailed Habilitationschrift follows hot on the heels of another recent volume on ancient Crete which Seelentag co-edited with his archaeological colleague, Oliver Pilz [1], which in turn was only the latest in a series of monographs and conference volumes focusing on Early Iron Age and Archaic Crete that have been rolling off the presses since 2005. Its focus is slightly different than earlier (if still recent) volumes which have concentrated on the material evidence. [2] Seelentag's volume is one set firmly within the German tradition of Altertumswissenschaft (or, as he puts it, 'unserer griechischen Geschichte').

The book is structured in three parts, divided into chapters. The first part deals, in broad terms, with method. Chapter 1 looks at Archaic Crete in relation to the kind of 'Greek history' we have and the kind we might need, and outlines the structure of the argument. Chapter 2 deals with material culture. Seelentag clearly has a firm grasp not only of the evidence itself, but also of current forms of archaeological reasoning and so of the kinds of debates that have arisen about 'Cretan austerity'. It is somewhat disappointing then to learn (in the following two chapters) that he has decided to concentrate on literary and epigraphical evidence. His reasons are several: first, there is simply too much evidence (there is!); second that he is better equipped to challenge the 'master narratives' of Greek history, and the 'Anglo-Saxon' consensus on Archaic Crete, through a thorough re-appraisal of such evidence than through looking again at the archaeological (for which we now have several useful studies). In this he sets out to challenge the view, prevalent in Anglophone scholarship and particularly in the work of Paula Perlman, [3] that fourth-century philosophers and historians such as Plato, Aristotle, Ephoros (in Strabo), Pyrgion and Dosiadas present us with a 'Cretan mirage', an idealised and ahistorical picture of ancient Crete. He argues that a close reading of the epigraphic evidence in relation to the literary can yield genuine new insights into the nature and development of Cretan political institutions. For this however he has to re-define 'Archaic Crete'. Seelentag argues (with some justice) that the normal periodization of Greek history (with a sharp caesura at the end of the Persian wars) makes no sense for Crete, which developed seamlessly from the seventh century until the end of the fifth. 'Archaic Crete' then means 'circa 650 to 400 BC'.

Part II deals specifically with key Cretan institutions, starting with the chief magistracy of ancient Crete, the kosmos (chapter 5). And there are certainly new insights to be had. The famous Dreros inscription (Meiggs-Lewis no. 2), which I and most scholars had always seen as a straightforward law regulating the term of office (and so as a mechanism to regulate 'aristocratic' competition) is re-interpreted as primarily an oath taken by new office holders (hence the invocation of the 'gods'). Chapters 6 and 7 offer new interpretations of the role of the citizen body (here the agora not the demos) and the council (bola) respectively; and chapter 8 deals with the question of what the polis might have means for Archaic Cretans, and its legal force in inscriptions.

Part III concentrates on how Cretan citizens were created. In this he is necessarily adopting a definition of the polis as not so much a city-state (Stadtstaat) as a citizen-state (Bürgerstaat). Chapter 9 is concerned with how free citizens were distinguished from unfree (slaves and serfs), foreigners, and 'free' non-citizens; chapter 10 deals with one of the constituent units of the polis, the 'tribe' (pyla), as a residential/kinship unit and a military one (startos). Chapters 11 and 12 (dealing with the andreion and paideia [education/upbringing] respectively) are more directly concerned with how Cretan citizens were created, and how social norms were inculcated. And again there are new insights. The centrality of commensality in the creation and maintenance of citizen bonds is rightly emphasised, and a plausible reconstruction of exactly how twelve/thirteen-year old boys progress through several stages (involving homoerotic bonding, hunting and feasting) to become full adult male citizens is put forward. In this he does not quite keep to his self-denying ordinance of keeping strictly to epigraphic and textual evidence, as his discussion of the andreion involves three archaeological case studies (Dreros, Prinias and Azoria), which are referenced but not illustrated. Here those not familiar with the sites will find the argument quite hard to follow. The final chapter places Cretan developments and institutions in a comparative perspective, not only with major Greek states (Corinth, Thessaly, Athens, Sparta) but also Archaic Rome (on which Seelentag is also an expert).

These last three chapters raise again the problem of whether a completely un-archaeological history of the Archaic period (in any region of Greece) is still possible. Seelentag is an excellent and original historian, and his is a great work of synthesis of some very difficult source material. But at times his reliance on one literary source is discomfiting. Take Ephoros' account of how Cretan youths are initiated into their andreion, which is the main text for chapter 12. Here Seelentag seems simply to accept Ephoros' account that the young men accept gifts of military dress, a cup and an ox, which is to be sacrificed to Zeus. But this account is at variance with the iconography we have from two sanctuaries where this kind of initiation might have taken place, the Dictaean Cave and Kato Symi. Here bronze plaques published and discussed in some detail by Angeliki Lebessi [4] clearly show that hares and agrimia (the Cretan wild goat) are much more prominent than bulls as the 'love gifts' that seal the bond between two young men. Such iconography emphasises, as Ephoros' account does not, the importance of hunting and of wild animals in the ritual process through which young men become citizens. In the final chapter too much emphasis is placed on the notion of an Archaic Greek 'aristocracy'. While I agree with much that he says about what made Cretan oligarchies distinct from mainland ones, it really is no longer possible to believe in a primordial Greek 'aristocracy' comprised of a clique of hereditary kin groups monopolising not only wealth but political office. [5] Aristeia is more of a performance, with clear material outcomes, one that stems not from the security of belonging to an established social and political hierarchy but rather from acute status anxiety in a culture that was ranked but not stratified. Seelentag is right however to see Crete as being unusual in Archaic Greece in having a clear and established hierarchy, a fully stratified social and political order. This requires an explanation, and he comes up with a good one. But it is an explanation needs to be more fully explored in relation to the material evidence.

I'm not sure I have done justice in this review to the range, subtlety and complexity of Seelentag's arguments. This is an original and important contribution to our understanding not of on Archaic Crete but to Greek history in general, and deserves to be widely read. I fear that it will not be simply because it is written in German and not in English. Once upon a time Anglophone scholars prided themselves on their knowledge of the principal language of Classical scholarship. But this is no longer the case. The scholarly world would greatly benefit from an abbreviated, English version of Seelentag's great work, preferably with many more illustrations.