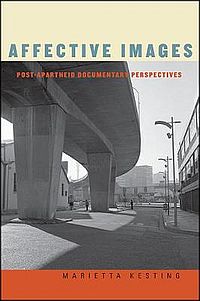 In 2008, South Africa experienced a number of extremely violent xenophobic attacks. Dissatisfaction among black communities about the failing of the so-called 'rainbow nation' and the hereto linked promises of (economic) equality, which had been pronounced in 1994, turned into hatred and aggression against (mostly black) people, who were perceived as foreigners. When Mozambican immigrant Ernest Nhamuave was set on fire alive, photographer Simphiwe Nkwali captured the violent incidence in the iconic photograph The Burning Man. Marietta Kesting centres her book Affective Images. Post-Apartheid Documentary Perspectives around these xenophobic assaults because, as she argues, they marked a "caesura" in South Africa's visual culture provoking a plethora of new documentary imagery (7/82).

Kesting structures the book, that is a reworked version of her dissertation, into six chapters, which are preceded by an introduction. Here the author assigns the field of coordinates in which to embed the analyses of both film and photographic documentary images dating to the apartheid era as well as to the post-1994 period. Taking an interdisciplinary approach - including inter alia philosophy, media studies, visual culture studies, gender theory - this field spans between politics or the political, violence, migration and affect. Especially the notion of affect, serves Kesting to correlate apparently disparate images, since, as she argues, documentary images transmit affect, causing re/actions, which eventually result in a "chain of affect" (11).

Against this theoretical background, Kesting therefore starts to map out different visual articulations of both black and white migration to and in South Africa (chapter 1). She points to the visualisations of the so-called Great Trek of Afrikaners to the hinterland or the migration of Africans from rural to urban areas, which, for instance, the documentary-fiction film Come back, Africa (1959) focuses on. By discussing these examples, Kesting discloses the racist structures that informed these movements and prepares the ground for reading the following examples of documentary images.

Kesting examines the possible affective responses to both images of violence or pain dating to the apartheid era as well as to images of tears from the new South Africa (chapter 2). From explicitly violent images, such as Sam Nzima's widely known photograph of Hector Pieterson, who was killed during the Soweto student uprising in 1976, or pictures by the Bang-Bang Club of violent clashes in the townships in the 1990s, Kesting moves on to images in which tears are used to symbolise a passed violent act - for instance rape - which was not pictured. Drawing closely on Kylie Thomas' concept of photographs as "wounding apertures" (39) and following Gayatri Chakravorty Spivak's notion of the "enabling wound", Kesting argues for documentary images of violence to have an "affective excess" and to act as "enabling wounds" causing political effect.

The outlining of the nation-building discourse that has evolved after 1994 and the pointing to the failure of the rainbow nation provides Kesting the historic-political backdrop against which to analyse the photograph of The Burning Man and makes evident why she understands it as a caesura (chapter 3). It is another example for "a wounding aperture" (97) that affects the production of "further images" (97). The films and music video (The Burning Man, 2008; Man on Ground, 2011; Powa, 2011) Kesting subsequently discusses have in common to move away from the iconic status of the photograph. They rather concentrate on Ernest Nhamuave as a person and his life story. By including these works, Kesting demonstrates how The Burning Man brought up broader questions of violence.

In contrast to these images, Kesting then continues to examine non-shocking, everyday photographs of African immigrants (chapter 4). Specifically focusing on passport and identity photographs, she questions aspects of il/legality, in/visibility, movements and borders that are tightly connected to such photographs. To counter the often-restrictive control of identity photography, Kesting includes two participatory photo projects (Hotel Yeoville, 2010; Working the City, 2011) in her discussion. Such projects draw attention to the migrants' agency and self-expression within the normative frame of photography and therefore exemplify, as Kesting argues, that "the frames and framings of African migrant subjectivities in photography" (141) need to be complicated.

From here Kesting moves on to study notions of in/visibilities and affective images of the 'Other' which are linked to questions of representation (chapter 5). To scrutinise this, Kesting chooses documentary films (e.g. We Are Nowhere, 2010; Border Farm, 2011) as well as the famous District 9 (2009) feature film that in a dystopian narration of extra-terrestrial aliens settling in Johannesburg tackles questions of xenophobia and othering in a post-apartheid society. All these examples blur the line between documentary and fiction images to different extents, allowing Kesting to demonstrate how the combination of images, which quote from a past visual realm and at the same time articulate visions of the future, complicates the documentary approach to reality.

Thus, the book traces the affective relations of documentary images from the anti-apartheid black-and-white photography to the more recent use of such images in feature films. The analyses lead Kesting to argue "for a radical practice of documentary - including fictionalization and reenacting that goes beyond post-representation but rather multiplies perspectives of whiteness and blackness" (200). Kesting's book can therefore be read as an attempt to contribute to the overcoming of "the binary of truth and counter-truth" (190) that often dominates South African documentary images as well as the discourses evolving around them.

Throughout the book, the rich and detailed descriptions of photographs and films are a strong asset, speaking of Kesting's sensitivity towards images. Her associative style of writing and the pointing to a number of different, interdisciplinary directions, however, at times seem to veil her arguments and the application of affect theory. For instance, Kesting briefly mentions the "affective response to passport photos" (122) but then misses to spell out more precisely their affective dynamics and to closely relate them to her chosen theoretical framework. This makes it difficult for readers to grasp the affective potential of non-violent pictures and to understand how they relate in terms of affect to violent images.

However, by deploying affect theory to South African documentary images, Marietta Kesting takes an innovative approach to analyse the country's visual culture and to rearrange its established orders. It enables her to identify a number of interdependencies between visual documents of migration, which date both to the apartheid era as well as to the new South Africa and which so far have not been pointed out. This entails the highlighting of relations between images that have become icons and images that are not as widely known. Kesting therefore offers readers a new understanding of South Africa's visual culture and opens up the field to also examine the more recent use of images (for instance on social media) while relating them to historic examples of the twentieth century.