Diane J. Reilly: The Cistercian Reform and the Art of the Book in Twelfth-Century France 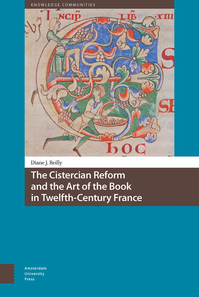 This book is a valuable contribution to our understanding of the spiritual project that animated the early life of Cîteaux, founded in 1098. Cistercian monks have always been associated with copying and illuminating manuscripts. After Robert of Molesme established a small monastic community in eastern Burgundy, at first called the New Monastery, in order to implement a more reclusive interpretation of the Benedictine rule, Abbot Robert's first successors, Alberic and then Stephen Harding, encouraged the inclusion of a scriptorium in the monastery. Reilly demonstrates that the motivation behind manuscript production was spiritual enlightenment, highlighting the central importance of communal reading, singing, and infusing images with symbols that mirrored their spiritual experience. Reilly also turns to surviving manuscripts from the beginning of the twelve century, preserved in the Bibliothèque municipale of Dijon, for evidence of the rhythm of life in early Cîteaux, the model for later Cistercians.

The book is divided into four chapters preceded by an extensive introduction (13-38) that focuses on the evolution of monastic identity and traces the general trends in the secondary literature. Each chapter is richly supplied with photographs (colour or black and white) of illuminated manuscripts with extensive commentary, guiding the reader to a clearer perception of the artistic expressions of Cistercian spirituality.

The first chapter proposes a parallel between two models of preparation for Advent, those of the New Monastery and of Chartres Cathedral. The differences lead the author to reconstitute the chants and the lectiones performed for the Advent cursus during the Night Office liturgy. These texts are relevant since they were chosen by the monks under the guidance of Abbot Stephen while he edited Scripture. The conclusion is interesting, stressing the close connection between the chants and lectiones that reflects the appreciation of the first generation of Cistercians for hearing, seeing, and singing as part of their spiritual experience. Following the path of Jerome, Stephen was convinced that 'eloquence was important in the transmission of the word of God' (57).

Chapter 2 focuses on Stephen Harding, who in 1113 provided the monks with a two-volume lectern Bible containing the most accurate translation possible. The monks were expected to memorize the liturgical text and to recite Scripture aloud as part of their communion with God, and Harding thus conceived an editorial project reminiscent of Jerome's obsession with precision. He consulted local Jewish scholars and checked Hebrew manuscripts to assess the accuracy of various translations of the Bible. In his Monitum (a text added at the end of the two-volume Bible and probably inspired by Jerome's enterprise) Harding praised the memory of Jerome, whom the abbot appeared to consider not only a mentor but also a 'pseudo-biblical author'. Five surviving portraits of Jerome produced in Cîteaux before such decorative illumination was forbidden demonstrate the high regard for Jerome in the Cistercian scriptorium. Detailed analyses of these portraits (including iconographical motifs such as open mouths, tonsured monks, representations of 'white monks', and portraits inside of initials) illustrate the intellectual affinity between Jerome and Harding (76: 'Jerome, dressed as a monk and delivering his own edition of Scripture, here serves as a simulacrum of Stephen Harding') and Jerome's profound legacy among early Cistercians.

The ground-breaking third chapter highlights the innovative contribution of the early manuscripts from Cîteaux to the representation (following the characteristics of what has been called 'Second style painting') of the Virgin Mary and to the iconography of the Tree of Jesse. The adoption of the topos of the virgo lactans, rooted in the Byzantine tradition of the Galaktotrophousa (122) and portraying the Virgin Mary nursing the baby Jesus from her bare breast, is linked to the Cistercian consideration for the tight connection between text and image in performing the word of God. The textual material of this chapter is extracted from surviving evidence concerning the feasts of Christmas and the Nativity of the Virgin. This analysis shows the special emphasis that Bernard of Clairvaux placed on such virginal representation as a metaphor involving the 'nourishing spiritual properties of milk'.

The fourth and final chapter reveals how concern for the oral transmission and performance of biblical texts is manifest in the iconographical motifs that were crafted to illuminate the first Cistercian manuscripts. Scripture was memorized, read aloud, and sung, and this spiritual orality was enriched with images representing insatiable animals devouring the Bible by biting, chewing, and swallowing. The ornamental animals in the initials in the manuscripts, like the omnipresent lion hungry for the words of Scripture, are recurrent symbols of spiritual struggle and also for the Cistercians monks' appetite for spiritual enrichment sated through the 'consummation' of Scripture.

The conclusion stresses the pivotal role of the senses in the organisation and intellectual and spiritual production of the first years of the Cistercians. Appendices (195-204) present the reconstruction of the services for Advent and the feast of the Nativity of the Virgin.

Reilly's book clearly explains and intelligently demonstrates the complex network of symbols that shaped the performance of Benedictine rules in the early years of the formation of the Cistercian identity. It shows how the liturgical cursus was developed and employed to train the memory, animate the reading, and provoke emotion via the chants. All the senses were involved to satisfy the desire for proximity to and, if possible, union with God. Historians suffer from the paucity of explicit sources for the beginnings of Cîteaux Abbey, but Reilly's careful attention to the manuscript details, scriptural passages performed during Advent or feasts, lectiones, refrains, and recurrent iconographical motifs that she has painstakingly gathered succeeds in recreating an important aspect of the Cistercian community in its first stages.