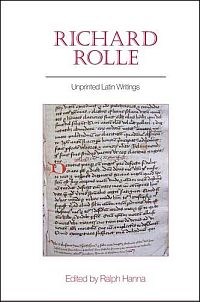 This volume completes work begun in Professor Hanna's guide to editing medieval texts, published four years earlier. [1] There, Hanna introduced the process of identifying and describing witnesses, collating and establishing the text, annotating it, and assembling an apparatus, taking as his example a section from the postils on the first verses of the Canticle of Canticles by Richard Rolle (d. 1349), the prolific hermit-mystic of later medieval Yorkshire. Since Rolle names himself in these postils (74-75), they proved essential to Hope Emily Allen's bio-bibliographical efforts early in the last century, allowing the attribution of other works to be assessed for their shared attitudes and style. Edited in Elizabeth Murray's 1958 dissertation and translated (from Murray's edition) by Robert Boenig in 1984, the text has remained difficult to access and has therefore been sidelined in recent work on the hermit, and on medieval religious culture more generally. [2] Hanna has filled this lacuna, bringing his editorial expertise to bear on Rolle's Latin, and the result is both exceptionally useful and intellectually generous.

The edition is best consulted with Hanna's handbook, which provides a fuller account of the textual history of the postils and detailed descriptions of several of the major manuscripts. In line with arguments offered there, the postils are edited from Dublin, Trinity College MS 153 (D, also the copy-text in Murray's dissertation), with variants given from three other manuscripts shown to provide independent witness to the authorial text. To the postils on the Canticle, Hanna adds two of Rolle's shorter Latin works: his commentary on the Magnificat and his De vita activa et contemplativa. The result is titled Unprinted Latin Writings, and Hanna means this description to be quite literal: the commentaries on the Paternoster and Apostles' Creed, as well as the less securely attributed commentary on the ps.-Athanasian Creed, are excluded from the volume on the grounds that they were printed in Johann Faber's 1535 and 1536 editions of Rollean opera. However, Hanna does include substantial selections from a work titled Viridarium, a commentary focusing on references to mercy (misericordia and related words) in the Psalms. This text was discussed among Rolle's authentic writings by Allen, and it is attributed to the hermit in two of three surviving copies, as well as in the medieval contents list for a fourth manuscript that once contained it. [3] Hanna persuasively argues against the attribution, and he considers its assignation, instead, to John Waldeby (d. c. 1372), concluding that this is more likely if not ultimately secure.

In a brief introduction (1-33), Hanna provides readings of each of the edited texts, including an impressive and persuasive account of the overall shape and trajectory of the postils on the Canticle, and a useful comparison of the Latin commentary on the Magnificat to the hermit's Middle English commentary on the same text, as well as short discussions of the manuscripts and an editorial rationale for each of the works. Notes (229-248) on the postils identify analogues in commentaries potentially known to Rolle, especially by Bernard of Clairvaux and Richard of St. Victor, while notes on the remaining texts are brief, focused on identifying potential sources. In light of the Marian reading at the beginning of section 4 of the postils (94-97), I wonder if the commentary by another Yorkshireman, William of Newburgh (d. 1198), might have yielded additional relevant material. An appendix (249-55) offers detailed accounts of relevant manuscripts not described elsewhere.

Comparison of Hanna's text against the manuscripts available to me reveals an impressive (and, in light of his expertise, completely expected) accuracy. In a sampling of a thousand words, I found only two misplaced letters in the Latin, one reading I would query, and two minor confusions in reporting the copy-text. On 178/4, tanto (as printed) is clearly the correct reading after quanto on the previous line, but D mistakenly reads tantum, an error that goes unnoted. Likewise, on 178/5, attamen is given as though it were an emendation of D's tantum, but the reading as printed is indeed what appears in the copy-text, while on 178/7, habito should read habitu (as in D and New York, Morgan Library MS M.872, Hanna's P). On 54/292, for aduenti read aduentui, as it stands in (at least) D and Oxford, Bodleian Library MS Bodley 861 (Hanna's B). Finally, I suspect that, on 54/291, ostendendam (as printed), with the final syllable abbreviated in both D and B, should be ostendendum, taking the following excellenciam ... et immensam reuerenciam as its objects.

As this example might indicate, the translation seems intended (quite fairly) to aid in reading the Latin, rather than to be read on its own. Again, one may note that the point of the volume is to establish the text, which Hanna has done expertly. Still, in some places the translation is somewhat misleading. To pick one other example: Et quia tale est nomen tuum, tam dulce, tam suaue, tam comfortabile; quod fractum redintegrat, ruinam restaurat ... is rendered: "And because your name is so sweet, so pleasant, so comforting; because it rejoins what is broken, restores what is fallen ... " (114-115). Here, after some re-punctuating of the Latin, "so comforting; because... " is better translated "so comforting, that ... ."

None of this detracts from the exemplary work that Hanna has done in making these texts available to scholars. And, in what was a delightful surprise, I was pleased to find that Hanna's editing has revealed the existence of another poem by the hermit, three goliardic quatrains with couplet rhymes at the half-line, following the form of his Canticum Amoris, though lacking the alliteration of that longer poem (90-93). [4] The passage was unnoted by Allen, and in Murray's dissertation it is printed as prose. [5] Similar discoveries appear throughout the volume, as do corrections to earlier scholarship. To give just one other example: in his note on 1.279-99 of the postils, Hanna lightly chides Ogilvie-Thomson for printing a Middle English alliterative poem as prose in her edition of Ego Dormio. Such insights, though modestly presented, are a testament to the editor's enviable learning and experience with this material, and they, like the text itself, will make his book a valuable resource for a long time indeed.