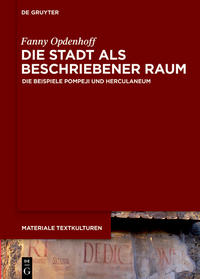 Toward the end of the twentieth century, Diane Favro introduced her influential exploration of urban intervention during the Augustan period with a thought experiment that foregrounded the value of creatively conceptualising the experience of built space at such a pivotal moment in Rome's history to any understanding of the ancient city. [1] By foregrounding the personal experience of space, Favro invited her readership to think about the extent to which they, both as individuals and architects, archaeologists and historians of art and society, personally experienced not just the urban environment of Augustan Rome but more broadly what they understood as the diverse architectures of space: the socio-cultural dimensions of history; the built fabric of thought, word, and deed within which all things exist and move. It is, of course, precisely these issues which Fanny Opdenhoff's study of epigraphic culture in Pompeii and Herculaneum addresses. Die Stadt als beschriebener Raum engages with just such notions of space and time, according to how these complex, interdependent micro- and macro-emphases intersect. In turn, her detailed examination of the epigraphic record at these sites considers how these local and global experiences condition the ways in which we understand the relationship between inscriptions, dipinti, and graffiti and their spatial and temporal contexts as well as the extent to which these understandings impact methodological and theoretical practice.

Opdenhoff establishes the evidentiary framework which grounds her study, describing in broad strokes the textual contents of the inscriptions, their design and style, and their distribution in Pompeii and Herculaneum (Chapter One). In doing so, she unpacks the analytical criteria informing her reassessment of epigraphic space and time: what individuals or groups are involved in the process of inscribing meaning onto the urban fabric (writers, clients, audience) and which conditions governed their actions (restrictions, regulations, or customs); what functions applied to communication inscribed or painted in public space and which strategies were used to realize intended objectives; how did form and design relate to each other on the one hand and to content on the other? Drawing these analyses together, Opdenhoff foregrounds what for her underpins the proposed study, namely, the role these factors and the movement of observers played in the perception of inscriptions and how they worked together within diverse spatial contexts.

The next chapter evaluates the nature of the evidence across the three general categories of inscription (stone and metal, dipinti, graffiti) recorded in the Corpus Inscriptionum Latinarum (CIL) and supplemented by personal observation (Chapter Two). By outlining the spectrum of content, the materials and tools used, and the design and distribution of the inscriptions, Opdenhoff provides an overview of the range of writing present at both sites, the kinds of stakeholders participating in or contributing to the creation of inscriptions, details of the production process and where form and content interconnect.

Chapter Three overlays the preceding descriptive outline with a hermeneutic analysis of contemporary perspectives on epigraphic writing in public space, drawn from literary, philosophical, and historical texts, inscriptions that refer to themselves or other inscriptions, and pictorial representations of writing. Opdenhoff is aware here of the cautions which apply to such an experimental exercise, conducting her analysis with due regard to careful classification of her sources and an explicitly immanent critique of the ancient discourse. According to this heuristic principle, she aims to highlight the gaps between what an inscribed text or image represented and what authentically comprised epigraphic culture in Pompeii and Herculaneum.

Once the stage is fully set, Opdenhoff examines five sites (with an excursus on a particular category of inscription) - the façades of III.2.1 and VII.12.15; the intersection of I.7.13,14 and I.8.16; the streetscape of IX.9.c-g; the areas around the amphitheatre and the necropolis in front of the Porta di Nocera; and the cippi of T. Suedius Clemens - to classify the inscriptions in their spatial context and to understand their constituent elements (Chapter Four). These detailed, anthropologically 'dense' descriptions of designated urban space, explicitly situated within their individual social contexts, facilitates reflection on site-specific patterns of epigraphic culture in ancient Pompeii.

Chapter Five draws together the observations and results of the preceding analysis. Overall, while the generally poor state of preservation and the varied documentation in the CIL are problematic, Opdenhoff's study demonstrates how the various categories of inscriptions allow us to view larger sections of the population performing as individual actors. Simultaneously, they show that discourses of social relations and social action were negotiated not only in certain contexts such as theatres, necropoleis, prominent public buildings, and similarly familiar urban places, but also in the streetscape and on facades and walls. The communicative functions of the inscriptions were not static but changed over time. During production the intentions of the author(s) were the focus of the marking process and the reception of these intentions once the inscription was produced was immediate; over time, however, reception was less and less dependent on these original intentions and ideas. On the contrary, new contexts of meaning kept emerging in the urban space.

Keyed to her site-specific studies, Opdenhoff provides an extensive catalogue of inscriptions (Chapter Six), as well as a variety of exemplary figures (56) and tables (5), plans of the contexts discussed in Chapter Four (6), and a wide range of colour illustrations (69). Her bibliography is usefully comprehensive.

Any summary of this book will only scratch the surface of its theoretically sophisticated explanation, splendidly detailed analysis, and closely argued interpretations. What follows, therefore, necessarily addresses in brief a select few of Opdenhoff's key findings. She shows how the complexity inherent in ascribing different meanings to the same inscriptions over time was purposefully used. According to this view of social process in Pompeii, wall inscriptions created meaning in ways that were not as ephemeral as traditionally understood. So, too, should inscriptions, dipinti, and graffiti be understood as impacting the spaces in which they were placed aesthetically and semantically. As such, whether erected on a monument (inscription), painted on a wall (dipinto), or written or drawn on a specific surface (graffito), the collocation of civic and social epigraphy influenced social action through their sheer presence in the urban fabric. To generalise, different forms of inscriptions claimed public space. In sum, Opdenhoff re-evaluates with considerable success Pompeii's inscriptions, in the process answering questions about their origin, their perception, and their significance, negotiated within their situated contexts beyond their value as sources of historical information.