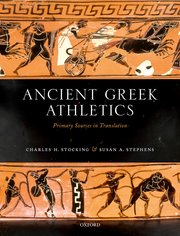 University instructors of courses on Greek and Roman sport often swap stories of frustration over the inadequacy of available sourcebooks on the subject. Many such sourcebooks were published decades ago and are for the most part outdated in their coverage of themes and selection of sources, not to mention at times idiosyncratic in the presentation of material. Most of these issues are successfully addressed and rectified in Ancient Greek Athletics, a new sourcebook on Greek sport.

C. Stocking and S. Stephens present a wide range of texts. Part I covers literary texts which are presented in chronological order ('Archaic and Early Classical period'; 'Classical Period'; 'Hellenistic Period'; 'Roman Period'). Sections on the 'Archaic and Early Classical Period' and 'Classical Period' are further subdivided into sections by genre (for instance, 'Epic'; 'Victory Odes'; 'Attic Oratory'; 'Philosophy') as suitable by historical period. The two sections covering Archaic and Classical Greece comprise numerous passages from poets and historians, but also judicious selections from medical and philosophical writings. The 'Hellenistic Period' and 'Roman Period' sections also comprise translations from a wide range of sources, including the Hellenistic epinicians by Callimachus and epigrams by Posidippus as well as an extensive selection by authors of the Roman Imperial period, including Pausanias, Plutarch, Philostratus, Epictetus, Galen, and others. Part II covers inscriptions, which are presented by location (for instance, Olympia, Delphi, Sparta, Athens, and others). Within each subsection, corresponding to a certain location, inscriptions are presented in chronological order. The emphasis here is on athletes as well as on regulations and select organizational aspects of athletic contests. A short part III on papyri, presented in chronological order, rounds up the translated texts.

In the Introduction, the authors justify their preference for a presentation of the material in chronological order (as opposed to a thematic division, adopted in some older sourcebooks) on the grounds that such a format prevents the uncritical and anachronistic mix up of sources, allows readers to trace interactions between authors, and elucidates the development of ideas and arguments about sport over the longue durée. Moreover, the format of presentation clearly reveals how different genres negotiate sport perceptions and practices, and the authors are right to underscore that laying out all these diverse texts in one book brilliantly demonstrates how deeply the world of athletics had permeated almost every aspect of life in Greek antiquity, from the time of the Homeric epics until the third century CE.

Even though the advantages of the format preferred by the authors are undeniable, a quick perusal of syllabi on ancient sport courses in North American universities available online clearly indicates a preference for a thematic approach within a broad chronological framework. To be sure, there can never be a one-size-fits-all approach in teaching choices and the organization of a sourcebook, and much depends on the familiarity of the presumed audience (readers of a book and/or students in a classroom) with the subject in hand. The authors of the sourcebook under review often provide in the short introductory notes, that contextualize many readings, cross-references to other sources in the book. Introductory notes for literary authors are primarily of an intertextual nature, and less frequently on themes and patterns in the history of Greek athletics that clearly emerge from the translated texts. To compensate, the reader can construct such thematic links and patterns through cross-references in the 'Glossary of Greek Terms' and the 'General Index'. Ultimately, it is up to the instructor or student using the book to explore, analyze, and synthesize, as part of the pedagogical process, the themes that suit their courses and interests.

In addition to its scope of coverage, other features of Ancient Greek Athletics make it stand out from older sourcebooks. In principle, authors, inscriptions, and papyri are independently introduced and, in cases where there is more than a single translated passage by author, additional notes provide short commentaries. Translations of literary texts are in general of high quality. Inscriptions often contain rare technical terms and jargon popular among athletes, and it is at times more challenging to keep track of all the semantic subtleties. For example, the last two lines of I5k (345) regarding the athlete T. F. Metrobios are translated "Titus Flavius Metrobius son of Demetrius won the periodos in the men's dolichos first in the games of Iasos, first in the men's category in the Capitoline Games in Rome in honor of Olympian Zeus". The correct meaning here is that Metrobios was the first among Iaseans (Ἰασέων πρῶτοϛ), the citizens of his native city, to win the periodos in the men's dolichos. Furthermore, he was the first of mankind (πρῶτοϛ ἀνθρώπων) to win the dolichos at the Capitolian games in Rome - he won, in other words, at the inaugural Capitolian games of 86 CE. The monument was dedicated to Olympian Zeus. The translation of this and other inscriptions can be perhaps revisited in a second edition.

Beyond the translated texts, a number of useful appendices cover in a succinct but reliable way central topics in the history of Greek athletics. These appendices can be read independently or collectively as a short introduction to ancient Greek sport by students but also non-specialist scholars. In fact, it wouldn't be an exaggeration to claim that Ancient Greek Athletics can be used as a quick and reliable reference point to some basic sources on Greek athletics by students and scholars alike. In addition to all these features, the book includes numerous and helpful illustrations and maps, as well as a select, up-to-date bibliography of basic titles, mostly in English.