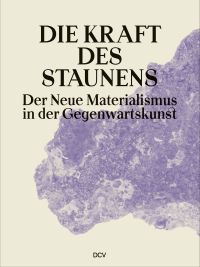 The Power of Wonder: New Materialisms in Contemporary Art is an illustrated bilingual German-English catalogue designed to accompany the eponymous exhibition held at Museum unter Tage, Bochum, from 4 May to 9 October 2022. It explores the connections between the philosophical movements known as 'new materialisms', and the work of the six contemporary artists in the show, namely Ilana Halperin, Agata Ingarden, David Jablonowski, Markus Karstiess, Robert Smithson, and Superflex. Comprising a selection of essays by various authors as well as a brief text on each artist, it testifies to new materialism's emphasis on the agency of seemingly inert materials and their multifarious relations with organic and inorganic entities of all kinds.

Among the high points, Katharina Hoppe and Anastassija Kostan's essay clearly synthesizes the philosophical bases of new materialism, from Jane Bennett's vital materialism, which ascribes life to inert things, to Donna Haraway's bestiary of agencies and Karen Barad's agential realism, which decenter the human subject by foregrounding their lack of autonomy and reliance on non-human others. Other essays bridge the gap between theory and practice. Annika Büttner and Kathrin Rottmann focus on Ilana Halperin's works, which consider nature as an active rather than passive force, deserving of acknowledgement and empathy. Halperin's My Conglomerate Family III (Self Portrait as Jasper), 2019, is a painting of a chunk of the semi-precious stone known as jasper, representing Halperin's self-portrait. It is part of a series of watercolors of rocks depicting not a human family, but Halperin's 'family by Choice' (124). Büttner and Rottmann analyze Halperin's work in terms of ecofeminist care work, arguing that even though caregiving is not one of new materialism's central notions, it nonetheless participates in it: Jane Bennett, for example, considers "the fact that humans are always intertwined with non-humans as the trigger and condition of an 'ecological ethos' for care responsibility" (93). Entanglements and relations in new materialism are thus not just abstract concepts but can carry with them a sense of responsibility towards one's family, as in Halperin's watercolors. Meanwhile, Maria Bremer explores changing notions of time in art history, from modernism through to Smithson's use of rocks as a means of storing temporalities, and Halperin's links between geological and human time. A radical re-envisioning of time is thus one way in which new materialism connects with art.

Yet the catalogue also raises a number of issues. For a start, the essay on time omits to mention Wolfgang Ernst's microtemporalities of the machine, which are important for the posthuman and nonhuman dimensions of new materialist-inflected digital art. [1] Secondly, although Robert Smithson undoubtedly inspired many artists working in the new materialist vein, his allegedly deep-seated influence is never questioned or debated, as if he were the sole precursor of new materialist-inflected art. The catalogue could have been an opportunity to devise a less simplistic historical lineage for new materialist-inflected art by supplementing Smithson's focus on earth art with the work of other innovative land artists such as Richard Long, whose fleeting, minimal interventions are very much in keeping with new materialism's desire to decenter the human subject's activities and influence. Yet another way of supplementing this lineage could have been to explore new materialism's influence on bio art, which also engages with nonhuman agency.

Another issue is the use in two of the essays of the term new materialisms to refer not just to new materialist philosophy as such but also to object-oriented ontology (OOO) (73, 85), which is not materialist but realist and upholds not relationism but the autonomy of all objects and is thus very different. [2] This is a common mistake, yet the failure to distinguish them properly obscures the reader's understanding of what is truly at stake in either movement. It also obscures the rich history of largely OOO-inspired art, which was in its heyday at the time of the 2012 documenta (13). Back then, artists tended to be more interested in OOO, because its reliance on objects made it easier to apply to artworks. Today however, artists have found ways to explore more abstract notions such as relationism, hence the increase in artists and artworks invoking new materialist themes. [3] A last issue is the catalogue's unquestioning acceptance of new materialism, despite the considerable criticism to which it has been subject in recent times - for example, the fact that the fluctuating, ever-changing interrelations and entanglements posited by new materialism are unable to account for the apparent stability of things.

All in all, the volume does not cover much new territory beyond that explored by existing publications on the topic, of which Realism Materialism Art (2015) and Power of Material - Politics of Materiality (2018) are two prominent examples. [4] As a result, it may not be of interest to specialist readerships. However, with its informative texts and lavish illustrations, it is tailor-made for readers seeking a clear and accessible introduction to new materialism and to the plethora of fascinating ways in which artists are applying its theses.

[3] An important exhibition that underscores this tendency is Reclaim the Earth, Palais de Tokyo, Paris, 2022.