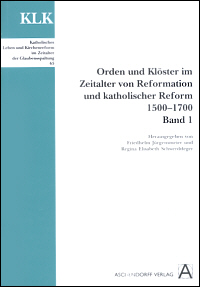 This collection of articles provides a useful overview of research on religious orders and monasteries in fifteenth, sixteenth and seventeenth Germany. There are eleven articles, organized by orders, ranging from discussion of the Benedictines and Cistercians, to the military orders, to newer orders like the Ursulines. This is the first of three planned volumes, with the later volumes dealing with those orders, like the Franciscans, Dominicans, and Jesuits, not discussed in this first volume.

The organization of the articles is somewhat old-fashioned, as are the themes they engage. The articles begin with a discussion of the history of each particular order, then examine fifteenth century reform efforts and the nature of pre-Reformation spirituality. The next section focuses on the impact of the Reformation, the place of monasteries and convents in territorial politics, and the influence of the Council of Trent and the Catholic Reform. Some of the articles have a brief discussion of spirituality and cultural life after Trent and, despite the title of the collection, most conclude their discussion with the Thirty Years' War. This general neglect of the later seventeenth century is unfortunate, since recent scholarship, for example the work of Derek Beales (Prosperity and Plunder. European Catholic Monasteries in the Age of Revolution, 1650-1815) argues that the century after 1650 was the heyday of the great abbeys of central Europe.

In the introduction, the editors of the volume put the Council of Trent and the reforms of monastic life initiated there at the center of the story of Catholic monasticism in Germany. Interestingly, however, Luther's Reformation provides the decisive moment for many of the articles. They emphasize, for example, how Benedictine and Cistercian houses were secularized by Protestant princes and that these ancient orders disappeared from whole regions of Germany. Even in Catholic regions, traditional monasticism entered a period of crisis in the sixteenth century and many houses experienced a shortage of monks and nuns, a collapse of traditional religiosity, as well as economic problems. The continued centrality of the Protestant Reformation in the history of German Catholicism probably reflects both historical realities and the dominance of Reformation history in the land of Luther.

The articles on the male branches of the Benedictines (P. Ulrich Faust) and Cistercians (Hermann Josef Roth) give credit to the Council of Trent, reformist traditions within the orders, and the Papacy (through the nuncios) for the recovery of these orders from the crisis of the Reformation in the decades around 1600. This argument reflects the traditions of Ordensgeschichte, the history of individual orders, often written by members of the order itself. There is considerable value in this perspective, especially in its emphasis on the cultural and spiritual continuities within Catholic monasticism. At the same time, this school tends to isolate developments within an order from wider developments within Catholicism. Thus the article about the Benedictines does not discuss the important book by Rudolf Reinhardt about the Abbey of Weingarten, which emphasizes that the religious and economic revival of that south German monastery owed much to the influence of the Jesuits. At the same time, these articles only touch on the ongoing and often bitter conflicts between the Jesuits and the older orders and limit the discussion of monastic resistance to the Tridentine reforms.

The articles on the female branches of the Benedictines (Anja Ostrowitzki) and the Cistericians (Manfred Eder) follow the same format as the articles on male monasticism, but are more original. In these articles, the emphasis is on the problematic heritage of the Council of Trent for female monasticism. The Tridentine decrees certainly strengthened monastic discipline and helped to save many houses from financial collapse, but they also imposed strict cloistering on nuns. Female houses had been less dramatically weakened by the Reformation - indeed a number of Benedictine and Cisterician houses survived as Protestant convents - and many nuns resisted the new discipline imposed by Trent. The articles show how difficult it was for Church authorities to impose strict Klausur, as nuns used their family connections and a variety of forms of resistance to limit the impact of new rules. Nevertheless, male administrators and confessors increased their power over nuns, while nuns also strengthened communal life in the convents and participated in many of the devotional movements of Tridentine Catholicism. These articles problematize, if they do not completely overturn, the traditional view that credits the Council of Trent with revitalizing German monasticism.

Several chapters examine the history of the military orders - the Teutonic Knights (Deutsche Orden) and the Knights of St. John (Johanniterorden). The authors of these chapters have a hard time fitting their stories into the format designed for the traditional monastic orders. Dieter Weiss, author of the chapter on the Teutonic Knights, shows how the Order split into Protestant and Catholic branches and adjusted to Mehrkonfessionalität (multi-confessionalism), even developing ideas of "Christian tolerance." Despite the reforms of Trent, the number of priests in the order declined steadily and it became a sinecure for aristocratic men. At the same time, the Knights developed ties to the Capuchins, who served the Order's parishes, and engaged themselves heavily in the Turkish wars. This chapter engages in more interesting analysis than some of the others, though the structure imposed by the collection seems to have prevented the author from providing a more interesting discussion of the social origins of the Knights themselves, or of their religious views and spiritual lives.

Like any collection of this type, the articles are of mixed quality. It does, however, have all the important qualities of a top-notch scholarly handbook, including useful bibliographies, maps, and complete lists of houses for each order. This is an indispensable collection for any historian of religion in early modern Germany.