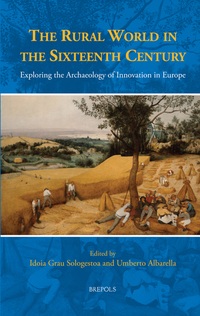 This collection of articles comes out of a 2017 conference held in Maastricht. This is a broad Europe-wide project, with contributions from Czech, French, British, Italian, Estonian, and Swedish scholars. The authors are all archeologists who bring archeological methods to the study of rural society and agriculture, primarily in the sixteenth century. The theme that holds the volume together is innovation, and almost all the authors argue that the sixteenth century saw the beginnings of the development of "modern" agriculture, in farming methods, patterns of settlement, breeding of livestock, use of new farm tools, and so on. The concept of modernity is, I think, somewhat problematic when applied to this period, but the articles here certainly show change and innovation at the local level. As several of the authors recognize, scholars of medieval and early modern rural society have identified constant change and innovation in rural society, and we should be careful about assuming "more" or "better" innovation in any particular period.

The perspective brought to these issues by archeologists broadens historical understanding.

The French authors of "Landscape and Settlement Evolution, "which studies two mountainous regions of eastern France, have gathered extensive evidence of evolving settlement patterns. This leads to important conclusions about "human-environmental relationships" (54), including the evolution of pastoralism, and the export of firewood and the use of blast furnaces leading to deforestation. Deforestation, in turn, led to changes in settlement patterns, including the development of hamlets at higher elevations. The authors contextualize their archeological data with written sources that illuminate seigneurial practices and trading practices. Importantly, this article brings people into the story by integrating the data drawn from archeological findings with human practices.

Tamsyn Fraser's article examining "Livestock Improvement and Landscape Enclosure" in England is a more technical. Fraser presents a large amount of evidence, presented in charts and maps, about the size of cattle and sheep, for example "cattle dental age profile" or "sheep postcranial bone length. " This article, and the following one by the editors, which compares animal husbandry in England and the Basque Country of Spain, reward the careful reader with a lot of information about animals. What is less apparent in these chapters is the interactions between the livestock, the landscape, and the people, something the authors recognize. Rather tentatively, Sologestoa and Albarella suggest that "a key period of potential change occurred as early as the sixteenth century [...]" (152).

Despite the high quality of the articles published, the editors lament "the difficulty finding archaeologists who were involved in the study of the sixteenth-century rural world" (17). They emphasize that European archeologists have traditionally studied earlier periods (ancient and medieval). Those scholars working the sixteenth century and later have mostly studied urban settings. It is then a goal of this volume to encourage further studies of rural society. I would point out that interest in early modern rural society among historians has also faded since its heyday under the influence of the Annales School in the 1960s and 1970s. It will be interesting to see if the (relatively) new engagement with environmental history will stimulate more work on rural society in both fields. Ladislav Capek's article on "Changes in Rural Milieu and Land Use," which examines estates in Southern Bohemia does just this, showing how new methods of demesne lordship (Gutsherrschaft) changed the landscape by promoting fish farming, beer brewing, and sheep herding (24). New forms of commercial agriculture also pushed tenant farmers off their farms, causing village desertion. Capek is thus able to document social and economic changes and their environmental impacts.

The editors make strong claims for the significance of the sixteenth century in the development of rural society. "One of the most stimulating aspects of the case studies presented here is that all, in their variable ways, indicate how the seeds of the organization of contemporary society can be found in the 'long' sixteenth century (19)." This kind of search for origins is always problematic of course. Several of the articles engage a much longer time frame than just the sixteenth century. The article by Anna Maria Grasso and her team studies changes in the size and shape of the broad bean (Vicia faba) in Apulia. The authors of this study trace these developments from the Middle Ages through the early modern period and emphasize that "innovation processes [...] have almost always been gradual, characterized by micro-changes and the adaptation of pre-existing forms to tackle emerging new requirements [...]" (158). My read of the articles is that innovation in rural society was ongoing in all periods. Perhaps population pressure and commercial development in the sixteenth century led to a faster pace of innovation, but pace is a hard concept to document. Another interesting finding in these articles is the tension between innovations promoted "from above," primarily from landlords, and those innovations that developed more organically "from below," that is at the initiative of the inhabitants of rural communities. I would argue that there appears to more evidence of innovation by farmers and artisans than by landlords.

This volume should be a valuable resource to historians and archeologists alike. The articles are all clearly written and accessible, which is particularly impressive given that the authors come from all over Europe.