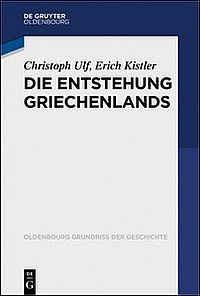 The authors, both renown scholars from Innsbruck, state as their purpose to present a methodologically updated view of the 'beginnings of Greece'. This includes viewing peoples (Völker) as constructs evolving through complex processes during long periods of time, not as primordial entities, regarding legendary accounts of the past as media for self-definition and identity construction, not as reliable evidence for the events they purport to describe, and consequently a reliance on the archaeological evidence when discussing the periods from which contemporary literary sources are not available. Instead of archaeological microhistories, the authors envisage a general line of development, relying on selected examples and accepting settlement patterns as the preferable guide for describing socio-political order. The archaeological data are interpreted in the light of the types of societies, above all the big-man societies, known from ethnology. As usual in the 'Oldenburg Grundriss' series, the first part of the book consists of 'Narrative' (Darstellung), followed by the discussion of the main problems and trends in the research (Grundprobleme und Tendenzen der Forschung).

Chapter 1 poses the question where should we look for the 'beginning' (Wo liegt der 'Anfang'?). The authors reject the earlier 'master narrative' which sees the 'beginning' in the immigration of the Greek tribes to the Aegean, or in the Trojan War (the historicity of which the authors reject), and which follows the concept of a development from the Mycenaean monarchic state to the Dark Age aristocracy and to the polis. Instead of the latter, they put forward the development from big-man societies to ethnos and polis (alternatively) as the preferable concept. In the second chapter discussing the archaeological evidence a true 'beginning' is marked by the appearance of the agora as the central institution (ca 700 BC), which is, following Herodotus (1.153), taken as the basic principle of the Greek way of life.

Throughout the book, two relatively independent lines of argument are presented. Chapters 2 (Der 'Anfang' Griechenlands und die Archäologie) and 3 (Die Lebenswelten 'des Anfangs' im Spiegel von Homer und Hesiod) of the narrative part of the book envisage the development of social and political organisation from the second millennium to the 7th century BC. The Bronze Age redistributive palatial societies (Great Providers) during the 12th century BC collapse were replaced by big-man societies continuing throughout the following Dark Age, exemplified above all by Lefkandi on Euboia, where the community erecting the famous 10th century BC 'heroon' is described as a complex big-man system, and by the nearly contemporary Nichoria in Messenia, viewed as a simpler society with a headman or simpler big-man on top typical for Dark Age Greece. Around 700 BC a new political organisation emerged, i.e. polis communities based on open debate and indicated in the archaeological record by the settlements organised around an agora, for which the early 7th century restructuration of the settlement of Megara Hyblaia in Sicily appears as the primary example. This change is illuminated by the poems of Hesiod and the Homeric epic, dated to the first half of the 7th century and accepted as giving a reliable description of the social realities of that time. The authors point out the important, sometimes decisive role the epics ascribe to the assemblies of the people (demos) on an agora, and view the basileis in the poems as big-men using the strategies of power building typical for this type of leaders according to the ethnological evidence. The poems are grasped as exemplifying the tensions created by the arrangement of the traditionally competitive big-men to the new polis society.

The second line of argument presented in Chapter 4 (Die Formierung einer hellenischen Identität) concerns the Greek ethnogenesis which is described as a persistent process, reactive to the social changes and the evolving contacts between the speakers of different dialects and with the other ethnic groups, from the early Archaic period until the Roman era. The authors point out the complexity of identities in the Mediterranean as a space of contact (Kontaktraum) and the importance of sanctuaries embedding the foreign traditions to local cultural contexts. A 'Hellenic' identity for the Archaic period is virtually ruled out. The eponymous Hellen in the 'Hesiodic' Catalogues (6th century BC) is viewed as one of many legendary ancestors, whose genealogy was constructed for establishing the relation between Doros and Ion the reputed ancestors of the Spartans and the Athenians. A 'panhellenic' significance was ascribed to the stemma only during the war against the Persians, an event which notably promoted the formation of the Hellenic identity.

The book presents a conceptually consistent and updated reasoning in both these lines of argument. The two lines are, however, connected rather loosely, which leaves the meaning of the 'beginnings/origins of Greece' somewhat unclear. The beginnings or origins of what? The appearance of communities with an agora, defined as the beginning of polis society, clearly does not mark according to the authors any 'beginning' of the Greek ethnic identity, taking shape gradually only several centuries later. Nor can the concept be compelling in every respect. One could easily posit a formation of Hellenic identity since the 8th century when increasing contacts in the Mediterranean could have promoted the Greeks' awareness of the similarity of their dialects, thus a distinction from the barbarophonoi (the speaker of unintelligible tongues) and thereby some feeling of belonging together. This would indeed bring the socio-political and ethnic 'beginnings' closer to each other. The suggestion that the genealogy of Hellen was constructed for promoting Doros and Ion seems doubtful, since the organic connection of Hellen with the stemma of Aiolos was already established in the 'Hesiodic' Catalogues (fr. 10/10a West, 5 Hirschberger) while Doros and Ion remained formal eponyms without proper descendants. Nor is it obvious that the appearance of archaeologically identifiable agora sites can reliably indicate the emergence of communities based on debate in assemblies. Assemblies do not necessarily require permanent constructions and could have been held in any suitable place (as described in the Iliad - noted by the authors on p. 106), which might have been the general practice during the Dark Ages (the authors have, moreover, dismissed the 8th century Zagora as a polis community, despite the signs of a free space in the centre of the settlement, suitable for public gatherings). The appearance of settlements organised around an agora can be seen as the terminus ante quem rather than ad quem for the emergence of polis societies.

These and other debatable points indicate the complexity of the subject and the legitimacy of different views and approaches. The view of Ulf and Kistler may not convince everybody in every respect, however, their coherent and expert presentation of the consistent and updated concept is certainly helpful and inspiring for both students and specialists, presents the results on the newest research, and provides an excellent basis for further discussion.